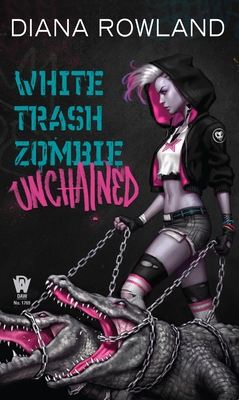 Angel Crawford has finally pulled herself together (literally!) after her disastrous dismemberment on Mardi Gras. She’s putting the pieces of her life back in order and is ready to tackle whatever the future holds.

Too bad the future is a nasty bitch. There’s a new kind of zombie in town: mindless shamblers, infectious and ravenous.

With the threat of a full-blown shambler pandemic looming, and a loved one stricken, Angel and the “real” zombies scramble to find a cure. Yet when Angel uncovers the true reason the plague is spreading so quickly, she adds “no-holds-barred revenge” to her to-do list.

Angel is busting her ass dealing with shambling hordes, zombie gators, government jerks, and way too many mosquitos, but this white trash chick ain’t giving up.

Good thing, since the fate of the world is resting on her undead shoulders.

Diana Rowland has lived her entire life below the Mason-Dixon line. She has worked as a bartender, a blackjack dealer, a pit boss, a street cop, a detective, a computer forensics specialist, a crime scene investigator, and a morgue assistant, which means that she's seen more than her share of what humans can do to each other and to themselves. She won the marksmanship award in her Police Academy class, has a black belt in Hapkido, and has handled numerous dead bodies in various states of decomposition. She presently lives in southern Louisiana with her husband and her daughter where she is deeply grateful for the existence of air conditioning. A master of urban fantasy, she’s the author of the Demon series and the White Trash Zombie series. She can be contacted via her website, www.dianarowland.com, or on Twitter at twitter.com/dianarowland.
Loading...
or support indie stores by buying on
(This book is on backorder)