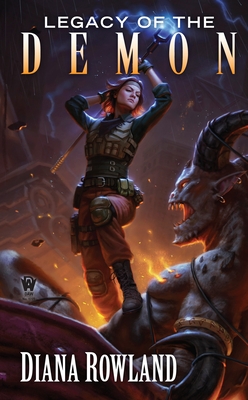 Legacy of the Demon (Kara Gillian #8)

The demon invasion of Earth has begun, and as the world’s top arcane expert, demon summoner Kara Gillian is leading the battle against them. Unnatural catastrophes, odd plagues, and martial law of the norm, and Kara is hard-pressed to keep up with the mounting threats. Add in the arrival of demonic lords with conflicting goals, and she has the perfect recipe for global disaster.

Yet when a centuries-old scheme puts the future of humanity on the line, Kara must scramble to stop the machinations, though treachery, hidden dangers, and ancient enemies block her at every turn. Soon she uncovers the disturbing legacy of the demon realm and the hideous betrayal at its core. However, before Kara can unmask the one behind the assault on Earth, she’ll need to perform the most dangerous summoning ever attempted―and if her enemy has its way, it may just be her last.

But no matter how much of her own blood she has to spill, it’ll be a cold day in hell before she surrenders.

Praise For Legacy of the Demon (Kara Gillian #8)…

Praise for the Demon series:

“I was awestruck at the twists and turns and the, 'Oh man, why didn't I see that before!'....This series is top-notch in the genre. Gritty and dark, this is really good reading!” —Felicia Day, author of You’re Never Weird on the Internet (Almost)

“Crosses police procedure with weird magic. Diana Rowland's background makes her an expert in the former, and her writing convinces me she's also an expert in the latter.” —Carrie Vaughn, New York Times bestselling author of Kitty Raises Hell

“Rowland spins a tale that is riveting, suspenseful, and deliciously sexy.” —Jenna Black, author of Speak of the Devil

“Everything we thought we knew about the inhabitants of Rowland’s universe is called into question, with devastating results. Rising star Rowland kicks it into a whole new gear with this outstanding story that is heartbreaking, terrifying, and utterly thrilling!” —RT Reviews (top pick GOLD)

“Rowland’s world of arcane magic and demons is fresh and original...[and her] characters are well-developed and distinct.... Dark, fast-paced, and gripping.” –SciFiChick

“I would say [the series] just keeps getting better—but it was already so good that I’m not sure that’s even possible.”—Fangs for the Fantasy

“You can’t go wrong with this series. Seriously, if you haven’t read a Kara Gillian book, then you need to put this series in your must-get pile!” —Night Owl Reviews

“A killer mid-series offering. It’s hard to believe that any book could create as much anticipation as the climactic end of Sins of the Demon, but Touch of the Demon opens up a whole new world, mythology, and love life for Kara.” —All Things Urban Fantasy

“The changes here will breathe fresh air into an already exceptional series for several more novels.... Five-star reading and twists you never thought of are coming.” —Wicked Scribes