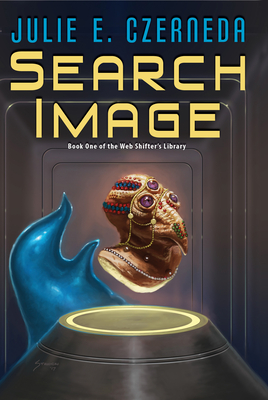 The first book in the Web Shifter's Library series returns to the adventures of Esen, a shapeshifting alien and member of an ancient yet endangered race, who must navigate the perils of a hostile universe.

Esen's back! And the dear little blob is in trouble, again.

Things began so well. She and her Human friend Paul Ragem are ready to celebrate the first anniversary of their greatest accomplishment, the All Species' Library of Linguistics and Culture, by welcoming his family back. He hopes. Having mourned his supposed death years ago, understandably, feelings are bent.

Before he can convince Esen to help him search, a friend shows up to use the Library. A crisis on Dokeci Na is about to explode into violence. To stop it, Evan Gooseberry needs answers. Unfortunately, the artifact he brought in trade holds its own distracting secret. A touch of very familiar blue. Web-flesh.

The race is on. Paul, to find his father. Esen, to search for a mysterious legacy while helping Evan avert an extinction. What none of them realize is the price of success will be the most terrible choice of all.

Julie E. Czerneda is a biologist and writer whose science fiction has received international acclaim, awards, and best-selling status. She is the author of the popular "Species Imperative" trilogy, the "Web Shifters" series, the "Trade Pact Universe" trilogy and her new "Stratification" novels. She was a finalist for the John W. Campbell Award for Best New Writer. Her stand-alone novel, In the Company of Others, won Canada's Prix Aurora Award and was a finalist for the Philip K. Dick Award for Distinguished SF. Julie lives with her husband and two children in the lake country of central Ontario, under skies so clear they could take seeing the Milky Way for granted, but never do. You can find her at www.czerneda.com.

Praise for the Web Shifters series:

"Beholder's Eye has certainly recaptured the wonder and excitement I felt when I first discovered the genre. Overall, Beholder's Eye is refreshingly short of cynicism, emotional manipulation, and gratuitous anything.  It's a fun book to read--smart and fast with a classic SF feel." —Tanya Huff, author of the Blood series

"It's all good fun, a great adventure following an engaging character across a divertingly varies series of worlds, with just a bit of unfulfilled romantic tension for spice." —Locus

"The plot of Beholder's Eye will strike the chords with readers familiar with the work of C.J. Cherryh or Hal Clement, but Czerneda stamps this with her own style, proving that a story told from the viewpoint of an alien race is worth reading when properly handled." —Starlog
or
Not Currently Available for Direct Purchase
Copyright © 2020 American Booksellers Association