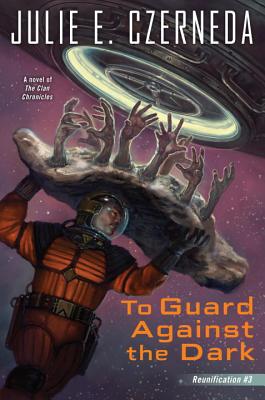 To Guard Against the Dark (Reunification #3) (Hardcover)

The final book in the hard science fiction Reunification trilogy, the thrilling conclusion to the award-winning Clan Chronicles

Jason Morgan is a troubling mystery to friends and enemies alike: once a starship captain and trader, then Joined to the most powerful member of the Clan, Sira di Sarc, following her and her kind out of known space.

Only to return, alone and silent.

But he's returned to a Trade Pact under siege and desperate. The Assemblers continue to be a threat. Other species have sensed opportunity and threaten what stability remains, including those who dwell in the M'hir. What Morgan knows could save them all, or doom them.

For not all of the Clan followed Sira. And peace isn't what they seek.

For twenty years, Canadian author/ former biologist Julie E. Czerneda has shared her curiosity about living things through her science fiction, published by DAW Books, NY. With seventeen (and counting) novels and numerous short stories in print, she’s also written acclaimed fantasy. Her Night’s Edge series (DAW) began with A Turn of Light, winner of the 2014 Aurora Award for Best English Novel. A Play of Shadow followed, winning the 2015 Aurora. Julie’s edited/co-edited sixteen anthologies of SF/F, including the Aurora-winning Space Inc. and Under Cover of Darkness. Her most recent anthology is the 2017 Nebula Award Showcase, to be published May 2017. 2017 will also see the completion of Julie’s Clan Chronicles, with the conclusion, To Guard Against the Dark, in stores October 2017. Please visit www.czerneda.com.


Praise For To Guard Against the Dark (Reunification #3)…

Praise for the Reunification series:

“I almost never cry at books and this one made me sob. Twice! Powerful, surprising, and packing a serious emotional punch, The Gate to Futures Past is a true game-changer." —Karina Sumner-Smith, author of Radiant

“Her multi-species style space opera universe...is a hallmark of the form, a fully realized saga of aliens and races and cultures that stands alongside works like C.J. Cherryh’s Chanur-verse.” —SF Signal

“Complex worldbuilding, unique aliens (‘Assemblers!?’), a race to save a sentient species: Czerneda’s This Gulf of Time and Stars will draw readers in and ‘port us among planetary systems, each more dangerous than the next.”  —Vonda McIntyre, author of The Moon and The Sun

“Julie Czerneda’s narrative style is as masterful, intricate, and beautifully constructed as the complex universe of This Gulf Of Time and Stars.”  —Stephen Leigh, author of The Crow of Connemara

“Czerneda is a first-class builder of worlds that challenge the imagination and characters who seize your heart. This Gulf of Time and Stars is a compelling page-turner, and I was sorry to reach the end.”  —Jenna Rhodes, author of King of Assassins

“Czerneda is a scientist first, asking this amazing question: What if an inherited characteristic of immense value to individuals and society was linked to a risk to the species as a whole? Sira di Sarc is Czerneda’s way of exploring this question—across worlds, species, and yes, time and stars.” —Ursula Pflug, author of The Alphabet Stones

“Heartwarming, fast-paced and just downright fun, new and existing fans of The Clan Chronicles won’t be able to put this book down.” —Marie Bilodeau, Aurora-nominated author of the Destiny series
or
Not Currently Available for Direct Purchase
Copyright © 2020 American Booksellers Association