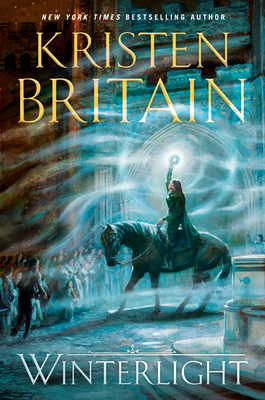 This seventh novel of the Green Rider series follows the adventures of messenger, magic wielder, and knight Karigan G'ladheon as she fights to save king and country from dark magic and a looming war.

After her capture at the hands of Grandmother and the Second Empire, Karigan G'ladheon is making halting progress towards recovery. Karigan takes on increasingly dangerous missions, haunted by the specter of her torturer, Nyssa, and sinking ever further into the mire of her recollections of the past and the losses she's sustained.

Meanwhile, the forces of the Second Empire are moving on Sacoridia and their primary target is a vulnerable garrison that guards a crucial mountain pass. Faced with new fatherhood and a country on the verge of war, King Zachary sends a contingent of soldiers and Green Riders to the pass--but his own recovery from the events of the north is not yet complete either.

Reunited with her fellow Riders at the pass, Karigan takes on a leadership role, but quickly finds that the Riders are not as she last left them. As tension mounts and war draws ever closer to the heart of Sacoridia, Karigan must discover what it truly means to be a Rider and a hero of the realm--and what sacrifices must be made to truly heal from her past.

Praise for the Green Rider series:

"Kristen Britain is one of the most astonishing fantasy writers working today. She has created a richly imagined world where magic is as real as courage, and where a young woman's heroism can change the course of history." ―Tess Gerritsen, author of The Apprentice

"Britain keeps the excitement high from beginning to end, balancing epic magical battles with the humor and camaraderie of Karigan and her fellow riders." ―Publishers Weekly

“In masterly fashion, Britain ultimately manages to bring the major plotlines together in a big battle. Even though the fight against the Second Empire is far from over, enough change happens to make this a rousing, satisfying adventure.” —Locus

“The gifted Ms. Britain writes with ease and grace as she creates a mesmerizing fantasy ambiance and an appealing heroine quite free of normal clichés.” —RT Reviews

“This captivating fantasy is filled with adventure, action, and heroes. Karigan grows tremendously as a person and in the end finds her own place in this world. The characters, including minor ones, are well-developed and the plot is complex enough to get the reader thinking. This is a real page-turner.” —VOYA

"Kristen Britain writes so beautifully that I never want to have to put her books down." ―Fantasy Book Review

Kristen Britain is the author of the New York Times bestselling Green Rider series. Deep within the spruce-fir forest of coastal Maine, down a rambling mossy vale, and far beneath the inkwell of the sky, you will find her woodland home, where she crafts her tales and consorts with a pair of furry, tuft-eared sprites.
Loading...
or support indie stores by buying on