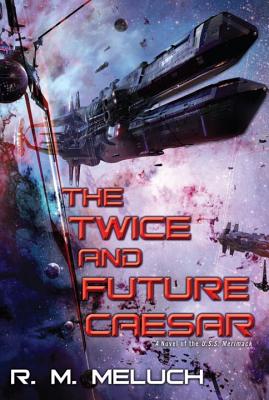 The Twice and Future Caesar (Tour of the Merrimack #6)

In the year 2448, the interstellar Empire of Rome spans an area almost as wide as the far-flung colonial worlds of the United States of America.

Caesar Numa Pompeii is still rebuilding his shredded empire after the catastrophic war that his predecessor, Caesar Romulus, waged against the United States. War’s end left Romulus in a nanovirus-induced coma, captive of Caesar Numa.

Numa has under his command a powerful living weapon—a patterner, an augmented man capable of synthesizing vast amounts of data into actionable intelligence.

Now, Numa has lost his prisoner, and his patterner may have turned on him, while the U.S.S. Merrimack has lost the commander of her Fleet Marines, Colonel T. R. Steele.

Events take a Mobius turn when fanatical devotees of Romulus rescue their fallen leader from his tortured captivity and fashion him into the most capable patterner ever created. Romulus is back, more insanely brilliant than ever. But without his queen, all the power in the universe means nothing. Romulus will move heaven and Earth and space and time to rescue his beloved Claudia.

Admiral John Farragut returns to the space battle­ship Merrimack in an attempt to head off the impend­ing temporal catastrophe. Past and future hinge on a critical moment when time broke once before in the distant star cluster known as the Myriad.

Praise for the Tour of the Merrimack series:

“While Meluch depicts combat and warrior culture as well as any writer in the subgenre, the true joy of this outstanding effort…lies in its inspired use of current speculation on the origins of the universe, quantum singularities and even the old chestnut of time travel…. Meluch shows particular skill in creating memorable characters while exhibiting a refreshing ruthlessness in subordinating them to the logical ramifications of the plot.” —Publishers Weekly (starred review) (for The Myriad)

“Rousing far-future SF novel.... This is grand old-fashioned space opera, so toss your disbelief out the nearest air lock and dive in.” —Publishers Weekly (starred review), for Wolf Star

“Meluch is an excellent writer, and has a firm grasp of military tactics, character development and storytelling. A good substitute for those waiting for David Weber’s next Honor Harrington novel.” —Sacramento Book Review

“Enough action and suspense for three novels. Meluch’s wry, realistic wit finds the ludicrous in the military, sex in the military, and a dozen other matters. A treat for military sf buffs.” —Booklist, for The Sagittarius Command

“Fast action, hairbreadth escapes, and Meluch’s facility for humor in an astonishing range of situations incum­bent on military life become the order of the day.... A fine yarn to chuckle along with, just like the previous Tour of the Merrimack adventures.” —Booklist, for Strength and Honor

“The Ninth Circle is an immensely readable book that flows very quickly and draws you in with sharp little hooks that demand you finish the book before you dream of beginning any other.” —Seattle Post-Intelligencer

“A lovely sequel with excellent writing and wonderful characters…. This is a great read for people who liked Horatio Hornblower and Jack Aubrey and Daniel Leary.” —SFRevu

“A heart-pounding thrill ride…. Fans of Star Trek and Heinlein alike will enjoy the story…a great story of space warfare and the triumph of the human spirit against insurmountable odds.” —Grasping for the Wind

R. M. Meluch is an American SF writer, and published the first of her Tour of the Merrimack series of military SF/space opera novels in 2005. She can be found at rmmeluch.com.
Loading...
or
Not Currently Available for Direct Purchase