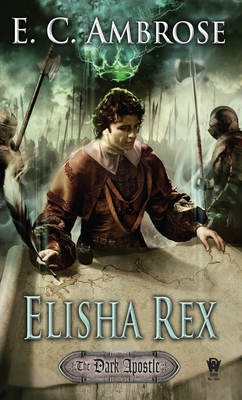 Elisha was a skillful barber-surgeon, cutting hair and stitching wounds for poor peasants like himself in 14th century London. But that was before catastrophe ruined his family. Before he was falsely accused of murder, and sent to die in an unjust war. Before he discovered his exceptional potential for a singularly deadly magic, and was forced to embrace his gifts and end that war...by using his newfound abilities to kill the tyrannical king.

Elisha is no longer the lowly barber he was, but it is hard to tell exactly who he is now. The beautiful witch Brigit, his former mentor, claims him for the magi, all those who have grasped the secrets of affinity and knowledge to manipulate mind and matter, and who are persecuted for it. Duke Randall, the man who first rose against the mad King Hugh, has accepted him as a comrade and ally in the perilous schemes of the nobility. Somehow, he has even become a friend to Thomas, both the rightful king and, something rarer, a good man.

But he is still a regicide, and in order to solidify Thomas’s authority among the restive barons, he had to let the new king sentence him to a horrific public execution. With Thomas’s covert aid, Elisha faked his death and went into hiding, but the peasants of London are beginning to call it a martyrdom, as legends of Elisha’s spectacular “miracles” in the service of his country have spread. Yet Elisha is finally beginning to understand the dreadful power within him, and he has never felt less holy—or more terrified.

Because there is another force at work in the world, a shadowy cabal beyond the might of kings and nobles, that sees its opportunity in the chaos of war and political turmoil—and sees its mirror in Elisha’s indivisible connection with Death. For these necromancers, Elisha is the ultimate prize, and the perfect tool.

When the necromancers’ secret plans begin to bear black fruit, England teeters on the brink of a hellish anarchy that could make the previous war look like a pleasant memory, and it appears Elisha is the only man who can stop it. But if he steps forward and takes on the authority he is offered to save his nation once again, is he playing right into the mancers’ hands?

Why does it seem like his enemies are the ones most keen to call him Elisha Rex?