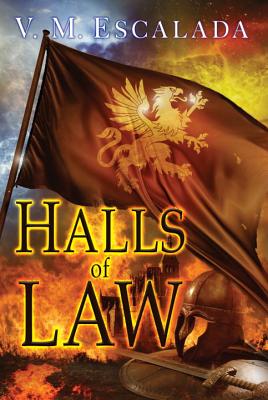 The Faraman Polity was created by the first Luqs, and has been ruled for generations by those of the Luqs bloodline. It is a burgeoning empire maintained by the combined efforts of the standing military force and the Talents of the Halls of Law. While the military preserves and protects, it is the Halls’ Talents—those gifted from birth with magical abilities—who serve as the agents and judges of the Law. For no one can successfully lie to a Talent. Not only can they read people by the briefest of physical contacts, but they can also read objects, able to find information about anyone who has ever come into direct contact with that object. Thanks to the Talents and the career military, the Polity has long remained a stable and successful society. But all that is about to change.

Seventeen-year-old Kerida Nast has always wanted a career in the military, just like the rest of her family. So when her Talent is discovered, and she knows she'll have to spend the rest of her life as a psychic for the Halls of Law, Ker isn't happy about it. Anyone entering the Halls must give up all personal connection with the outside world, losing their family and friends permanently. Just as Kerida is beginning to reconcile herself to her new role, the Polity is invaded by strangers from Halia, who begin a systematic campaign of destruction against the Halls, killing every last Talent they can find.

Kerida manages to escape, falling in with Tel Cursar, a young soldier fleeing the battle, which saw the deaths of the royal family. Having no obvious heir to the throne, no new ruler to rally behind, the military leaders will be divided, unable to act quickly enough to save the empire. And with the Halls being burned to the ground, and the Talents slaughtered, the Rule of Law will be shattered.

To avoid the invaders, Kerida and Tel are forced to enter old mining tunnels in a desperate attempt to carry word of the invaders to Halls and military posts that have not yet been attacked. But the tunnels hide a dangerous secret, a long-hidden colony of Feelers—paranormal outcasts shut away from the world for so long they are considered mythical. These traditional enemies of the Halls of Law welcome Kerida, believing she fulfills a Prophecy they were given centuries before by the lost race of griffins. With the help of these new allies, Kerida and Tel stand a chance of outdistancing the invaders and reaching their own troops. However, that is only the start of what will become a frantic mission to learn whether any heir to the throne remains, no matter how distant in the bloodline. Should they discover such a person, they will have to find the heir before the Halian invaders do. For if the Halians capture the future Luqs, it will spell the end of the Faraman Polity and the Rule of Law.

V. M. Escalada lives in a nineteenth-century limestone farmhouse in southeastern Ontario with her husband. Born in Canada, her cultural background is half Spanish and half Polish, which makes it interesting at meal times. Her most unusual job was translating letters between lovers, one of whom spoke only English, the other only Spanish.

Praise for Halls of Law:

"Halls of Law begins a fresh, engaging new fantasy series set in a world of marvellous texture and magic. Love this one and can't wait for more!" —Julie E. Czerneda, author of A Turn of Light

"The richness of the world is reason enough to immerse yourself in this book. The typical historically based fantasy empire is given a makeover; this is a culture with abundant opportunities for women to wield power, political and otherwise." —Barnes & Noble Sci-Fi and Fantasy Blog

"I was drawn in by the comforting prose and stayed fully invested because of the characters and world. Halls of Law is a fun, optimistic Epic Fantasy that proved a welcome change of pace from some of the more grimdark fantasy I’d been reading." —SFFWorld

"Kerida's a great protagonist.... She's practical and makes hard decisions about her own survival.... I really enjoyed this and eagerly await the sequel." —Sci-Fi Fan Letter

"If you are looking for a new epic fantasy series to sink your reading teeth into...Halls of Law is definitely a winner.... [A]n epic fantasy for the 21st century, where we have an absolutely marvelous heroine’s journey from the outset." —Reading Reality
or
Not Currently Available for Direct Purchase
Copyright © 2020 American Booksellers Association