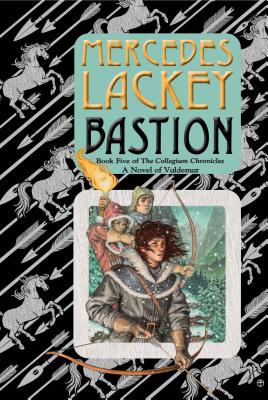 Mags returns to the Collegium, but there are mixed feelings--his included--about him actually remaining there. No one doubts that he is and should be a Herald, but he is afraid that his mere presence is going to incite more danger right in the heart of Valdemar. The heads of the Collegia are afraid that coming back to his known haunt is going to give him less protection than if he went into hiding. Everyone decides that going elsewhere is the solution for now. So since he is going elsewhere--why not return to the place he was found in the first place and look for clues? And those who are closest to him, and might provide secondary targets, are going along. With Herald Jadrek, Herald Kylan (the Weaponsmaster's chosen successor), and his friends Bear, Lena, and Amily, they head for the Bastion, the hidden spot in the hills that had once been the headquarters of a powerful band of raiders that had held him and his parents prisoner. But what they find is not what anyone expected.

Praise for the Collegium Chronicles:

“Returning to her beloved Valdemar universe, Lackey opens her new series at a pivotal time in the history of Valdemar, when the education of Heralds is changing and dangers from other lands are felt in the court and on the training field. Series fans will enjoy the variations on a familiar theme, while enough information is presented for first-timers to discover a world of high adventure and individual courage. Highly recommended.” —Library Journal

“An enjoyable and pleasant read.... Mags is an appealing protagonist facing challenges (and successes) with which readers will empathize." —RT Book Reviews

Mercedes Lackey is a full-time writer and has published numerous novels and works of short fiction, including the best-selling Heralds Of Valdemar series. She is also a professional lyricist and a licensed wild bird rehabilitator. She lives in Oklahoma with her husband, artist Larry Dixon, and their flock of parrots. She can be found at mercedeslackey.com.
Loading...
or support indie stores by buying on
(This book is on backorder)