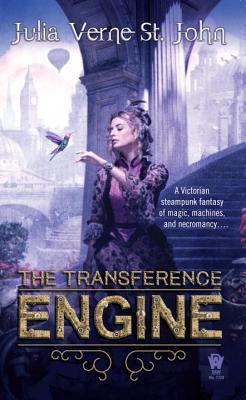 Madame Magdala has reinvented herself many times, trying to escape Lord Byron's revenge. She destroyed the Transference Engine Byron hoped to use to transfer his soul into a more perfect body and perpetuate his life eternally. A fanatical cult of necromancers continues Byron's mission to force Magdala and Byron's only legitimate child--Ada Lovelace--to rebuild the machine and bring Byron back.

Magdala now bills herself as the bastard daughter of a Gypsy King. She runs a fashionable London coffee salon and reading room while living a flamboyant lifestyle at the edge of polite society. Behind the scenes, she and Ada Byron King, Countess of Lovelace, use the massive library stored at the Bookview Cafe to track political and mercantile activity around the world. They watch to make certain the cult of necromancy surrounding Lord Byron, the poet king who worshipped death, cannot bring him back to life.

On the eve of Queen Victoria's coronation in June of 1838, rumors of an assassination attempt abound. Both the Bow Street Runners and Magdala's army of guttersnipe spies seek to discover the plot and the plotters. Who is behind the mysterious black hot air balloon that shoots searing light from a hidden cannon, and who or what is the target? And who is kidnapping young girls from all walks of life?

Desperately, Magdala and her allies follow the clues, certain that someone is building a new Transference Engine. But is it to bring back the dead or destroy the living?

Julia Verne St. John fell in love with British History when just a tot and she caught a glimpse of Queen Elizabeth II on a visit to the U.S. With a B.A. in history tucked under her arm, she has since studied many aspects of the subject. Steampunk offers her a wonderfully romanticized opportunity to experiment with costumes and play with the amazing "what if" scenarios of alternate history.

Praise For The Transference Engine…

“A steampunk romp set in early 19th-century London.... Verne St. John paints an intriguing portrait of London past and introduces a colorful cast of characters.... An enjoyable read.” —Publishers Weekly

“Victorian steampunk fantasy The Transference Engine is interesting because it features two of history’s most notable women, but gives their stories a fantastical spin. Verne St. John’s interesting snapshot of the past of a steampunk London and the colorful characters contained within the book’s pages make The Transference Engine an intriguing fantasy read.” —Nerd Much?
or
Buy Here
Copyright © 2020 American Booksellers Association