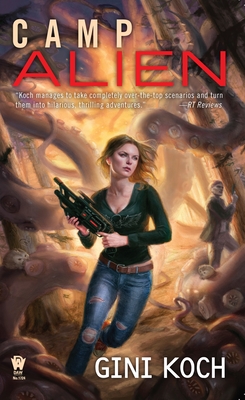 The President and First Lady, aka Jeff and Kitty Katt-Martini, don’t get any downtime once the Mastermind has been revealed to the world. Not only do they have myriad high-level government positions to fill, but the scrutiny and pressure on this Administration has gone into overdrive.

The sudden reappearance of a long-forgotten adversary turns out to be the tip of the iceberg. New robots and androids attacking, old enemies making new alliances, and new aliens with interesting abilities almost overshadow the fact that the U.S. still has to host a peace summit at Camp David between Israel and Iraq. It’s clear that while the Mastermind may be down, there are plenty of others ready to take his place—and all that stands between them and success are Kitty and Company.

Kidnappings, rescues, creepy hideouts, a hidden black site, and a domestic dispute that could end Jeff and Kitty’s marriage are nothing compared to finding not one but two hidden labs where dangerous and deadly things are brewing.

But when the President and his entourage finally get to the peace talks, things are no better. Mossad rightly suspects something’s wrong with both their Prime Minister and the President of Iraq. A hidden in-control superbeing, an android replacement, and an army of Fem-Bots turn the peace talks into a Battle Royale that the team might not actually survive. And if they don’t make it, Earth won’t make it, either.

Gini Koch writes the fast, fresh and funny Alien/Katherine “Kitty” Katt series for DAW Books, the Necropolis Enforcement Files, and the Martian Alliance Chronicles. She also has a humor collection, Random Musings from the Funny Girl. As G.J. Koch she writes the Alexander Outland series and she’s made the most of multiple personality disorder by writing under a variety of other pen names as well, including Anita Ensal, Jemma Chase, A.E. Stanton, and J.C. Koch. She has stories featured in a variety of excellent anthologies, available now and upcoming, writing as Gini Koch, Anita Ensal, Jemma Chase, and J.C. Koch. Reach her via: www.ginikoch.com
Loading...
or support indie stores by buying on