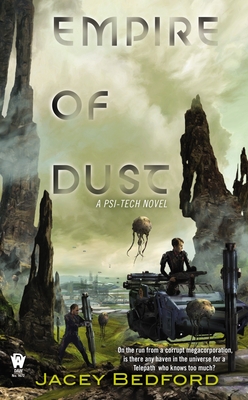 To combat manipulative megacorporations with telepathic technology, two heroes must rebel, overthrowing the enemy's oppressive influence in the first book in this exciting sci-fi adventure

Mega corporations, more powerful than any one planetary government, use their agents to race each other for resources across the galaxy. The agents, or psi-techs, are implanted with telepath technology. The psi-techs are bound to the mega-corps -- that is, if they want to retain their sanity.

Cara Carlinni is an impossible thing – a runaway psi-tech. She knows Alphacorp can find its implant-augmented telepaths, anywhere, anytime, mind-to-mind. So even though it’s driving her half-crazy, she's powered down and has been surviving on tranqs and willpower. So far, so good. It’s been almost a year, and her mind is still her own.

She’s on the run from Ari van Blaiden, a powerful executive, after discovering massive corruption in Alphacorp. Cara barely escapes his forces, yet again, on a backwater planet, and gets out just in time due to the help of straight-laced Ben Benjamin, a psi-tech Navigator for Alphacorp’s biggest company rival.

Cara and Ben struggle to survive a star-spanning manhunt, black-ops raids, and fleets of resource-hungry raiders. Betrayal follows betrayal, and friends become enemies. Suddenly the most important skill is knowing whom to trust.

Praise For Empire of Dust (A Psi-Tech Novel #1)…

Praise for the Psi-Tech novels:

"Space opera isn't dead; instead, delightfully, it has grown up.... A fine example of a novel which has its roots in the subgenre but grows beyond it." —Jaine Fenn, author of Principles of Angels

"Bedford mixes romance and intrigue in this promising debut, which opens the Psi-Tech space opera series.... Readers who crave high adventure and tense plots will enjoy this voyage into the future." —Publishers Weekly

"A nostalgic space opera.... Bedford's prose is brisk and carries the reader quite sufficiently along." —Tor.com

"A well-defined and intriguing tale set in the not-too-distant future.... Everything is undeniably creative and colorful, from the technology to foreign planets to the human (and humanoid) characters. Author Bedford's worldbuilding feels very complete and believable, with excellent descriptions bringing it all to life." —RT Reviews

"I'm very, very excited to see where this series goes next. The foundation that Bedford has laid has so much potential and promise. This is an author I will watch." —Bookworm Blues

"The first of a new space opera series that delivers the goods and holds lots of promise of things to come." —SF Signal