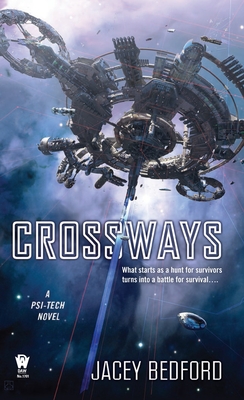 To combat manipulative megacorporations with telepathic technology, two heroes must rebel, overthrowing the enemy's oppressive influence in the second book in this exciting sci-fi adventure

So they better not get caught.

These are the people who defied the megacorporations and saved a colony by selling the platinum mining rights and relocating ten thousand colonists somewhere safe, and they’re not saying where that is.

They take refuge on crimelord-run Crossways Station with the remnants of their team of renegade psi-techs and the Solar Wind, their state-of-the-art jump-drive ship. They’ve made a promise to find a missing space ark with thirty thousand settlers aboard. But to do that, Ben and Cara have to confront old enemies.

Alphacorp and the Trust: separately they are dangerous, united they are unstoppable. They want to silence Ben and Cara more than they want to upstage each other. If they have to get rid of Crossways in order to do it, they can live with that. In fact, this might be the excuse they’ve been looking for….

Praise For Crossways (A Psi-Tech Novel #2)…

Praise for the Psi-Tech novels:

"Space opera isn't dead; instead, delightfully, it has grown up.... A fine example of a novel which has its roots in the subgenre but grows beyond it." —Jaine Fenn, author of Principles of Angels

"Bedford mixes romance and intrigue in this promising debut, which opens the Psi-Tech space opera series.... Readers who crave high adventure and tense plots will enjoy this voyage into the future." —Publishers Weekly

"A nostalgic space opera.... Bedford's prose is brisk and carries the reader quite sufficiently along." —Tor.com

"A well-defined and intriguing tale set in the not-too-distant future.... Everything is undeniably creative and colorful, from the technology to foreign planets to the human (and humanoid) characters. Author Bedford's worldbuilding feels very complete and believable, with excellent descriptions bringing it all to life." —RT Reviews

"I'm very, very excited to see where this series goes next. The foundation that Bedford has laid has so much potential and promise. This is an author I will watch." —Bookworm Blues

"The first of a new space opera series that delivers the goods and holds lots of promise of things to come." —SF Signal