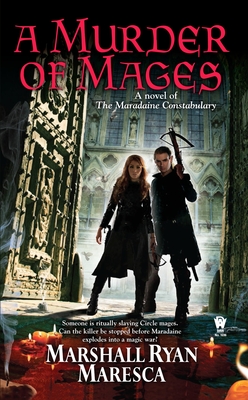 A Murder of Mages (Maradaine Constabulary #1)

Marking the debut of the second series set amid the bustling streets and crime-ridden districts of the exotic city called Maradaine, A Murder of Mages introduces us to this spellbinding port city as seen through the eyes of the people who strive to maintain law and order: the hardworking men and women of the Maradaine Constabulary.

Minox Welling is a brilliant, unorthodox Inspector and an Uncircled mage—almost a crime in itself. Nicknamed “the jinx” because of the misfortunes that seem to befall anyone around him, Minox has been partnered with Satrine because no one else will work with either of them.

Their first case together—the ritual murder of a Circled mage— sends Satrine back to the streets she grew up on and brings Minox face-to-face with mage politics he’s desperate to avoid. As the body count rises, Satrine and Minox must race to catch the killer before their own secrets are exposed and they, too, become targets.


Praise For A Murder of Mages (Maradaine Constabulary #1)…