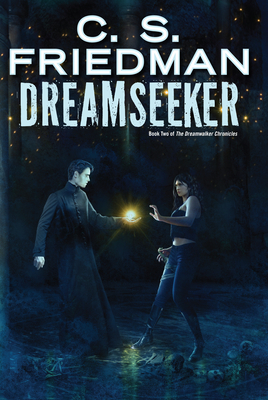 When Jessica Drake learned that her DNA didn't match that of her parents, she had no idea that the search for her heritage would put her family's lives in danger, or force her to cross into another world. In an alternate Earth dominated by individuals with unnatural powers called Gifts, Jessica learned that there was a curse within her blood, one so feared that all who possessed it were destroyed on sight. For she was a Dreamwalker, and the same dark Gift that would allow her to enter the dreams of others would eventually destroy her mind and spread insanity to all those around her.

Now she is back with her family, but there is no peace to be found. Her childhood home has been destroyed, her mother's mind is irreparably damaged, and the Gift of the Dreamwalkers is beginning to manifest in her in terrifying ways.

When a stranger invades her dreams and creatures from her nightmares threaten to cross into the waking universe, Jessica knows she must return to the alternate Earth where she was born and seek allies... even if doing so means she must bargain with those she fears the most.

Dreamseeker is the gripping sequel to C.S. Friedman's Dreamwalker.

An acknowledged master of Dark Fantasy, Celia Friedman is a John W. Campbell award finalist, and the author of the highly acclaimed Coldfire Trilogy, New York Times Notable Book of the Year This Alien Shore, In Conquest Born, The Madness Season, The Wilding and The Magister Trilogy.  Ms. Friedman worked for twenty years as a professional costume designer, but retired from that career in 1996 to focus on her writing. She lives in Virginia, and can be contacted via her website, www.csfriedman.com.

Praise for the Dreamwalker series:

"Dreamwalker is nerve-twisting and fascinating. Siblings Jesse and Tommy are tangled in a murderous genetic bait-and-switch that transcends worlds and time.... Waiting for the next book will be tough!" —Tamora Pierce, New York Times-bestselling author of the Song of Lioness series

"[C.S. Friedman] writes bright, clear prose that can shine like gemstones or cut like broken glass. If you haven’t read her work you need to do something about that right now." —Tad Williams, New York Times-bestselling author of the Memory, Sorrow, and Thorn series

"Once again, CS Friedman shows us strong characters and innovative magic that transcend genre. Dreamwalker is a satisfying read for long-time fans, but will also serve to showcase her work to a whole new generation." —Peter V. Brett, New York Times-bestselling author of the Demon Cycle series

“There is plenty of suspense; some affecting, mild horror scenes; and intriguing hints at a much deeper game being played, with Jesse as the pawn.” ―Booklist

"Friedman does many things well in this novel, and her experience as an engaging storyteller is on full display.... Friedman shows that her writing and storytelling abilities are strong, regardless of what type of story she’s telling." —Tor.com

"The fast pace and younger protagonist will make this an obvious crossover book for YA readers, appealing...to those teens (and adults) who enjoy Cassandra Clare." —Library Journal

“Friedman does a great job at expanding upon the foundation she put in place in Dreamweaver.” ―Bookworm Blues

“Dreamseeker cemented this trilogy as one that I'm truly invested in.” ―No More Grumpy Bookseller
or
Buy Here
Copyright © 2020 American Booksellers Association