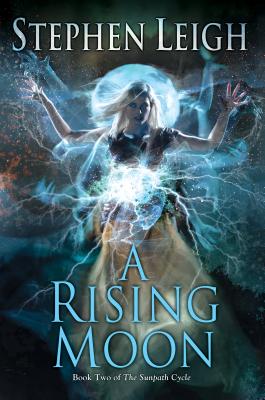 The second novel in this gripping historical fantasy series, set in an alternate first-century Britain, follows Orla Paorach, freedom fighter and daughter of a Boudica-like warrior.

Orla Paorach's life was overturned for the first time when her mother Voada was beaten senseless, and Orla was taken by Bakir, a minor Mundoan army officer, as his second wife. Now her world is shattered a second time: Bakir has died in battle, and so has her mother, now known as the Mad Draoi of the Cateni.

Orla flees northward to Onglse, the island home of the draoi that is the center of the Cateni rebellion against the Mundoa. She becomes quickly embroiled in battle as well as deceptions from both sides of the conflict, as everyone expects that she's come to take up her mother's mantle. Those who knew her mother offer their help, but can she trust any of them? Can she avoid becoming the Mad Draoi herself, lost in the magic her mother once tried to wield?

An intense, fast-paced novel, A Rising Moon explores trust, courage, and the deep seduction of power.

Praise For A Rising Moon (Sunpath #2)…

Praise for A Fading Sun:

"Readers, who will detect a resemblance to Ireland, Scotland, and England during the Roman era, will eagerly anticipate the sequel." —Booklist

"Leigh builds a vivid, thrilling and exciting new world that will captivate and hold the imagination in A Fading Sun." —RT Reviews

"Stephen Leigh’s A Fading Sun is another powerful entry in the category of stories about the change wrought by empires—for better or worse." —Barnes & Noble Sci-fi & Fantasy Blog

Stephen Leigh is a Cincinnati-based, award-winning author with nineteen science fiction novels and over forty short stories published. He has been a frequent contributor to the Hugo-nominated shared world series Wild Cards, edited by George R. R. Martin. He teaches creative writing at Northern Kentucky University. Stephen Leigh has written Immortal Muse, The Crow of Connemara, and the fantasy trilogy Assassin's Dawn.
Loading...
or
Not Currently Available for Direct Purchase