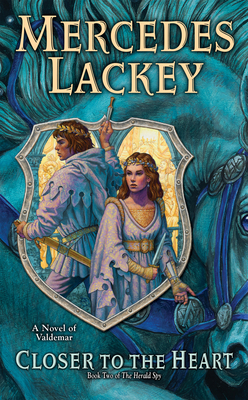 Closer to the Heart (Valdemar

Herald Mags, Valdemar’s first official Herald Spy, is well on his way to establishing a coterie of young informants, not only on the streets of Haven, but in the kitchens and Great Halls of the highborn and wealthy as well.

The newly appointed King’s Own Herald, Amily, although still unsure of her own capability in that office, is doing fine work to support the efforts of Mags, her betrothed. She has even found a way to build an army of informants herself, a group of highly trained but impoverished young noblewomen groomed to serve the highborn ladies who live at Court, to be called “The Queens’s Handmaidens.”

And King Kyril has come up with the grand plan of turning Mags and Amily’s wedding into a low-key diplomatic event that will simultaneously entertain everyone on the Hill and allow him to negotiate behind the scenes with all the attending ambassadors―something which had not been possible at his son Prince Sedric’s wedding.

The answer, of course, is “everything.”

For all is not well in the neighboring Kingdom of Menmellith. The new king is a child, and a pretender to the throne has raised a rebel army. And this army is―purportedly―being supplied with arms by Valdemar. The Menmellith Regency Council threatens war. With the help of a ragtag band of their unlikely associates, Mags and Amily will have to determine the real culprit, amass the evidence to convince the Council, and prevent a war nobody wants―

―and, somewhere along the way, get married.

Praise For Closer to the Heart (Valdemar: The Herald Spy #2)…

Mercedes Lackey is a full-time writer and has published numerous novels and works of short fiction, including the best-selling Heralds of Valdemar series. She is also a professional lyricist and a licensed wild bird rehabilitator. She lives in Oklahoma with her husband, artist Larry Dixon, and their flock of parrots. She can be found at mercedeslackey.com or on Twitter at @mercedeslackey.
Loading...
or support indie stores by buying on