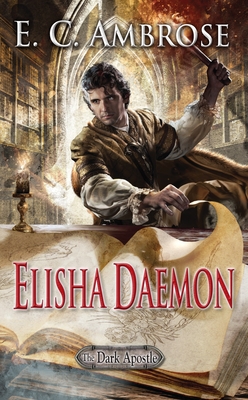 In this fifth and final installment of The Dark Apostle, barber-surgeon-turned-sorcerer Elisha must save plague-stricken England from its path of destruction--or risk succumbing to the very dark magic he is trying to eradicate.

Elisha was once a lowly barber-surgeon from the poorest streets of 14th-century London; now, he may be the most powerful magus alive. He faces the necromancers, a shadowy cult of magi who draw their power from fear and murder--and who have just unleashed the greatest plague the world has ever known upon a continent already destabilized by wars, assassinations, and religious conflict.

Empires and armies are helpless with no clear enemy to fight. The Church loses its hold upon the faithful as prayers go unanswered. Europe has become a bottomless well of terror and death, from which the necromancers drink deep as the citizens sink into despair. Elisha knows that if there is to be any chance of survival, he must root out the truth of the pestilence at its unexpected source: the great medical school at Salerno. There, Elisha might uncover the knowledge to heal his world.

But as he does, his former mentor, the beautiful witch Brigit, lays her own plans. For there may be one thing upon the face of the planet deadlier than the plague: the unfiltered power of Death within Elisha himself.

E. C. Ambrose is a fantasy author, history buff, and accidental scholar.
Loading...
or
Not Currently Available for Direct Purchase