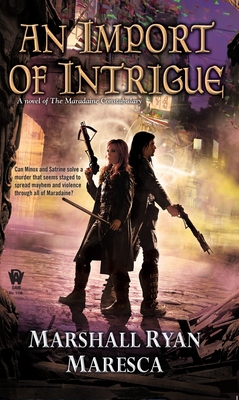 An Import of Intrigue (Maradaine Constabulary #2)

The neighborhood of the Little East is a collision of cultures, languages, and traditions, hidden away in the city of Maradaine. A set of streets to be avoided or ignored. When a foreign dignitary is murdered, solving the crime falls to the most unpopular inspectors in the Maradaine Constabulary: exposed fraud Satrine Rainey, and Uncircled mage Minox Welling.

With a murder scene deliberately constructed to point blame toward the rival groups resident in this exotic section of Maradaine, Rainey is forced to confront her former life, while Welling’s ignorance of his own power threatens to consume him. And the conflicts erupting in the Little East will spark a citywide war unless the Constabulary solves the case quickly.

Praise For An Import of Intrigue (Maradaine Constabulary #2)…