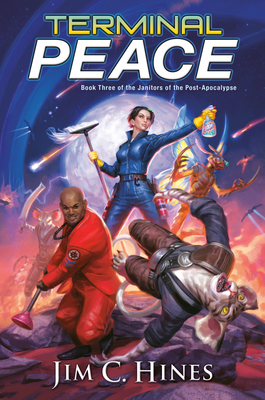 Terminal Peace (Janitors of the Post-Apocalypse #3)

The third and final book of the Janitors of the Post-Apocalypse follows a group of unlikely heroes trying to save the galaxy from a zombie plague.

Marion “Mops” Adamopoulos and her team were trained to clean spaceships. They were absolutely not trained to fight an interplanetary war with the xenocidal Prodryans or to make first contact with the Jynx, a race who might not be as primitive as they seem. But if there’s one lesson Mops and her crew have learned, it’s that things like “training” and “being remotely qualified” are overrated.

The war is escalating. (This might be Mops’ fault.) The survival of humanity—those few who weren’t turned to feral, shambling monsters by an alien plague—as well as the fate of all other non-Prodryans, will depend on what Captain Mops and the crew of the EDFS Pufferfish discover on the ringed planet of Tuxatl.

But the Jynx on Tuxatl are fighting a war of their own, and their world’s long-buried secrets could be more dangerous than the Prodryans.

To make matters worse, Mops is starting to feel a little feral herself…

Praise For Terminal Peace (Janitors of the Post-Apocalypse #3)…

Praise for The Janitors of the Post-Apocalypse:

Jim C. Hines has published more than forty short stories as well as numerous fantasy and sci-fi novels, including the humorous Jig the Dragonslayer trilogy; the Princess series, which re-imagines traditional fairy-tale princesses as butt-kicking action heroines; and the Magic Ex Libris series, about a centuries-old secret society dedicated to the use and control of book magic. In 2012, he won the Hugo for Best Fan Writer.
Loading...
or support indie stores by buying on