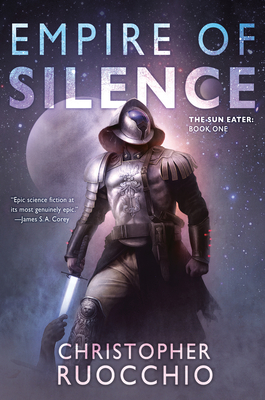 Hadrian Marlowe, a man revered as a hero and despised as a murderer, chronicles his tale in the galaxy-spanning debut of the Sun Eater series, merging the best of space opera and epic fantasy.

It was not his war.

The galaxy remembers him as a hero: the man who burned every last alien Cielcin from the sky. They remember him as a monster: the devil who destroyed a sun, casually annihilating four billion human lives—even the Emperor himself—against Imperial orders.

On the wrong planet, at the right time, for the best reasons, Hadrian Marlowe starts down a path that can only end in fire. He flees his father and a future as a torturer only to be left stranded on a strange, backwater world.

Forced to fight as a gladiator and navigate the intrigues of a foreign planetary court, Hadrian must fight a war he did not start, for an Empire he does not love, against an enemy he will never understand.

Praise for Empire of Silence:

"Empire of Silence is epic science fiction at its most genuinely epic.  Ruocchio has made something fascinating here, and I can't wait to see what he does next." —James S.A. Corey, New York Times-bestselling author of The Expanse novels

“Empire of Silence has the sweep and political complexity of Dune (though no sandworms). It builds to a blazing climax, followed by a satisfying conclusion. I recommend the book.” —David Drake, bestselling author of the RCN Series

“Empire of Silence is a rich tapestry of future history and worldbuilding, a galactic-sized story of a hero, a tyrant, but portrayed as a man.” —Kevin J. Anderson, New York Times-bestselling author of The Dark Between the Stars

“Empire of Silence packs in action and erudition in equal measure. This is a gripping first installment in a space opera that delivers both high-adrenaline thrills and hard-earned wisdom about the human spirit.” —D.J. Butler, author of Witchy Eye

“A richly imagined epic, briskly and vividly told.” —R.M. Meluch, author of the Tour of the Merrimack series

“A craftsman of rare ability, Christopher Ruocchio lures you into a future filled with danger, action, irony, vaulting prose, and a few, precious dollops of hope.” —David Brin, author of Earth and The Postman

Christopher Ruocchio is the author of The Sun Eater, a space opera fantasy series from DAW Books, as well as the Assistant Editor at Baen Books, where he co-edited the military SF anthology Star Destroyers, as well as the upcoming Space Pioneers, a collection of Golden Age reprints showcasing tales of human exploration. He is a graduate of North Carolina State University, where a penchant for self-destructive decision-making caused him to pursue a bachelor’s in English Rhetoric with a minor in Classics. An avid student of history, philosophy, and religion, Christopher has been writing since he was eight years old and sold his first book —Empire of Silence— at twenty-two. The Sun Eater series in available from Gollancz in the UK, and has been translated into French and German.

Christopher lives in Raleigh, North Carolina, where he spends most of his time hunched over a keyboard writing. He may be found on both Facebook and Twitter at @TheRuocchio.
Loading...
or
Not Currently Available for Direct Purchase