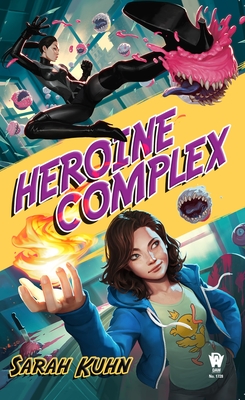 Sarah Kuhn is the author of the popular Heroine Complex novels—a series starring Asian American superheroines. The first book is a Locus bestseller, an RT Reviewers’ Choice Award nominee, and one of the Barnes & Noble Sci-Fi & Fantasy Blog’s Best Books of 2016. Her YA debut, the beloved Japan-set romantic comedy I Love You So Mochi, is a Junior Library Guild selection and a nominee for YALSA’s Best Fiction for Young Adults. Her latest novel for young adults, From Little Tokyo, With Love—a modern fairy tale featuring a half-Japanese heroine—is a Junior Library Guild Selection, one of the New York Times’ YA Books to Add to Your Reading List, a People Magazine Best Book of the Summer, a nominee for the Golden Poppy Award, and Penguin Random House’s One World, One Book title of the year. She has also penned a variety of short fiction and comics, including the critically acclaimed graphic novel Shadow of the Batgirl for DC Comics and the Star Wars audiobook original Doctor Aphra. Additionally, Sarah was a finalist for both the CAPE (Coalition of Asian Pacifics in Entertainment) New Writers Award and the Astounding Award for Best New Writer. A third generation Japanese American, she lives in Los Angeles with her husband and an overflowing closet of vintage treasures.
Loading...
or support indie stores by buying on