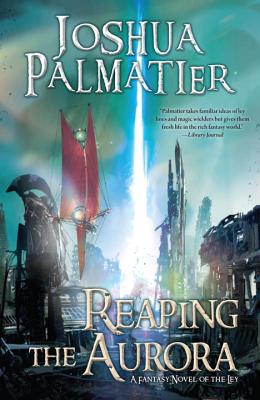 The final book in the thrilling epic fantasy Ley trilogy, set in a sprawling city of light and magic fueled by a ley line network.

In a world torn apart by the shattering of the magical ley lines that formerly powered all the cities and towns of the Baronies, there are few havens left for the survivors. The uncontrolled distortions released by the shattering have claimed the main cities of the Baronial Plains. And many of the Wielders who controlled the ley died in the apocalyptic cataclysm their manipulation of the ley created.

Wielder Kara Tremain and former Dog Allan Garrett, survivors of the city of Erenthrall’s destruction, have seized control of the new Nexus created at the distant temple known as the Needle, the stronghold of the White Cloaks and their leader, Father Dalton.  With Father Dalton a prisoner, Kara intends to use the Needle’s Nexus to heal the major distortions that threaten to shake their entire world apart.

But while she and the remaining Wielders managed to stabilize Erenthrall, they have not been able to stop the auroral storms or the devastating earthquakes sweeping across the lands. Now they are hoping to find a means to heal the distortion at the city of  Tumbor, releasing the nodes captured inside.  If they succeed, the ley network should be able to stabilize itself.

But the distortion over Tumbor is huge, ten times the size of the one over Erenthrall.  Kara will need the help of all of the Wielders at the Needle in order to generate enough power, including the rebel White Cloaks.  But can Kara trust them to help her, or will the White Cloaks betray her in order to free Father Dalton and regain control of the Needle, possibly destroying any chance of healing the ley network in the process?

Meanwhile, Allan journeys back to Erenthrall, hoping to form alliances with some of the survivors, only to discover that Erenthrall itself has sunk a thousand feet into the ground.  The vicious groups that plagued them on their last visit have banded together under a new leader—Devin, formerly Baron Aurek’s second-in-command.  While discussing an alliance with the Temerite enclave, Devin’s men attack, forcing Allan and the Temerites to flee back to the Needle, leaving Erenthrall in Devin’s hands.

But the Needle is no safe haven.  Father Dalton’s followers have begun to rebel, starting riots and creating unrest, all of it targeted at Kara and the Wielders.  The tensions escalate beyond control when Father Dalton declares he’s had a vision—a vision in which the Needle is attacked from the north by dogs and from the south by snakes; a vision that ends with the quickening of the distortions called the Three Sisters to the north . . . and the annihilation of reality itself!

Joshua Palmatier was born in PA, but now resides in NY. Palmatier started writing SF and Fantasy novels and short stories in eighth grade, and hasn't stopped writing since, mainly focusing on novels. He can be found at jpsorrow.livejournal.com.

Praise For Reaping the Aurora (Ley #3)…

Praise for the Ley series:

“Palmatier kicks off an epic fantasy series with this complex tale set in a world where wonders are accomplished by manipulating the magical energy of ley lines.... Palmatier lets the story build slowly, introducing a sprawling cast and fascinating setting, before explosively upsetting the status quo.” —Publishers Weekly

“Palmatier exploits an active imagination to good effect, with characters who develop along with the story...with plenty of tension and excitement. Fantasy regulars looking for a fresh series with real bite should find it worth a try.” —Kirkus

“Intricate worldbuilding, engaging and complex characters, and a fresh sharp take on magic and politics. Shattering The Ley proves that Joshua Palmatier is definitely a key new voice in original fantasy.” —Kari Sperring, author of Living with Ghosts

“Shattering the Ley, the terrific new fantasy from Joshua Palmatier, is built of equal parts innocence, politics, and treachery. It features a highly original magic system, and may well be the only fantasy ever written where some of the most exciting scenes take place in a power plant. I couldn’t put it down.” —S. C. Butler, author of Reiffen’s Choice

“Shattering the Ley stands apart from the majority of second-world fantasy by having a distinctly modern cast to its worldbuilding.” —Tor.com

“There’s a lot happening, constantly driving the plot forward, and the political intrigue and ideological conflicts between the clashing factions keep things fresh and engaging.” —Bibliosanctum

“Palmatier brilliantly shatters genre conventions.... An innovative fantasy novel with a very modern feel.... For readers who are willing to tackle a more challenging fantasy, without clear heroes and obvious conflicts, Shattering the Ley is an excellent read.” —SFRevu
or
Not Currently Available for Direct Purchase
Copyright © 2020 American Booksellers Association