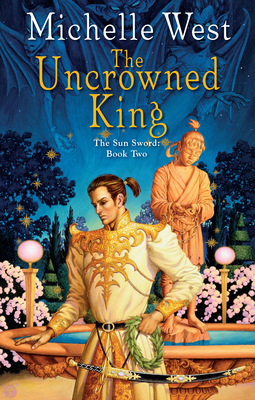 The Uncrowned King (The Sun Sword #2)

The second novel of the acclaimed Sun Sword series returns to a war-torn world of noble houses divided and demon lords unleashed...

The King’s Challenge—it was a proving ground for warriors in the Essalieyan Empire, the hallowed contest that made legends of men. And for Valedan, last survivor of the ruling family of the Dominion, it was a declaration of his right to claim the throne stolen from the Leonne clan by treachery and assassination.

Failure to earn the title of King’s Champion would not deprive Valedan of either his Dominion or Essalieyan allies, but winning would announce to the world that he was no callow boy, no mere pawn in the games of power. And the games of power were indeed being played—not only in the Empire and Dominion, but in the far more dangerous realm of the Lord of Night.

As the time of the Challenge neared, Valedan and all those who guarded him would be hard-pressed to survive long enough for him to enter the competition. For the demon kin had been set to hunt him down and destroy him. They had failed before though many innocents had paid for the price. They must not fail again, for slaying Valedan was but the opening gambit in a war that would free the Lord of Night to reign over all the mortal world....

Praise For The Uncrowned King (The Sun Sword #2)…

Michelle West is the author of three interconnected series: The Sacred Hunt duology, the six-volume Sun Sword series, and The House War novels. She has published numerous short stories and fantasy novels under her maiden name, Michelle Sagara. She was a two-time nominee for the Campbell Award. She works part-time at BAKKA Books, one of Toronto’s larger bookstores, and writes a column for The Magazine of Fantasy & Science Fiction. She can be contacted via her website, michellesagara.com or on Twitter at @msagara.
Loading...
or support indie stores by buying on