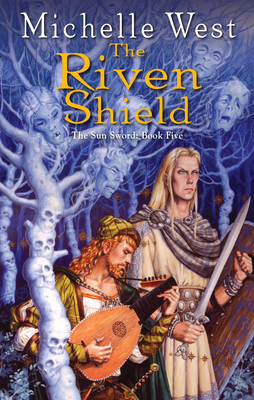 The Riven Shield (The Sun Sword #5)

The fifth novel of the acclaimed Sun Sword series returns to a war-torn world of noble houses divided and demon lords unleashed...

Valedan kai di’Leonne, last survivor of the ruling clan of the Dominion, has forged an alliance with his people’s ancestral enemies, the Northern armies of the Essalieyan Empire. Though young and untried, he has also won the support of Dominion Tyr’agnate Ramiro di’Callesta. Whether he can now do the impossible, and bring Tyr’agnate Mareo di’Lamberto over to his side, remains to be seen. Even with such powerful backers, if Valedan can’t gain possession of the Sun Sword and survive the wielding of it, all will be lost....

Jewel of House Terafin has joined forces with the Voyani, bringing with her the legendary Warlord, Avandar, the bard-assassin, Kallandras, and Lord Celleriant of the Winter Queen’s court. Hunted by the demonic Kialli, they will be hard pressed to escape from the Sea of Sorrows and link up with Valedan’s troops....

In Averalaan, House Terafin is on the brink of a bloody dynastic war—and Jewel’s den is caught in deadly political infighting within the House, forced by command of the Terafin herself to take on the most difficult roles of their lives....

Kiriel, child of the Lord of Darkness and a mortal woman, also must face the greatest challenge of her life, torn between the conflicting demands of her father’s demonic realm and her human heritage....

The Kialli demon lords and their human allies are banding together, too, readying to sweep down upon the Northern armies in a devastating campaign of terror and destruction that will either see peace restored or all the furies of the Hells and the Lord of Darkness himself released upon the world....

Praise For The Riven Shield (The Sun Sword #5)…

Michelle West is the author of three interconnected series: The Sacred Hunt duology, the six-volume Sun Sword series, and The House War novels. She has published numerous short stories and fantasy novels under her maiden name, Michelle Sagara. She was a two-time nominee for the Campbell Award. She works part-time at BAKKA Books, one of Toronto’s larger bookstores, and writes a column for The Magazine of Fantasy & Science Fiction. She can be contacted via her website, michellesagara.com or on Twitter at @msagara.
Loading...
or support indie stores by buying on
(This book is on backorder)