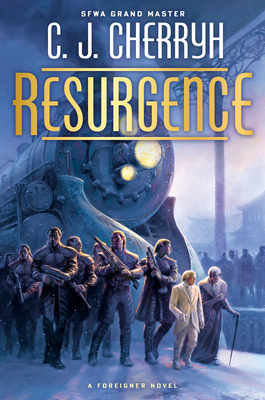 Now in mass market, the twentieth book in the beloved Foreigner saga returns to the trials of diplomat Bren Cameron, as he navigates the tenuous peace he has struck between human refugees and the alien atevi.

Bren Cameron, diplomat in residence, usually represents the ruler of the atevi state. But Ilisidi, the dowager, has been known to borrow his services from time to time—and she has her own notions how to solve the simmering hostilities in the south of the atevi continent, playing one problem against another.

This time, she is betting the hard-won northern peace—and the lives of the people—on being right. She has commandeered the Red Train, taken aboard what passengers she chooses, and headed for the snowy roof of the world, where a hard-scrabble town and its minor lord are the first pieces she intends to use.

SFWA Grand Master C.J. Cherryh has written more than seventy books, including the highly popular Foreigner science fiction series. She won the Hugo Award for her novels Downbelow Station and Cyteen, and her short story "Cassandra." She has also won the Campbell Award, Locus Award, and more.
Loading...
or support indie stores by buying on
(This book is on backorder)