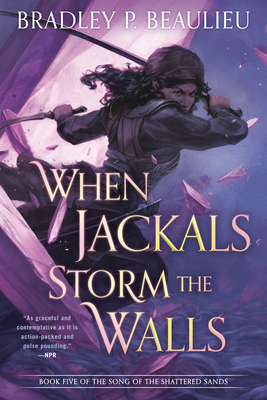 When Jackals Storm the Walls (Song of Shattered Sands #5)

Now in trade paperback, the fifth book in The Song of the Shattered Sands series--an epic fantasy with a desert setting, filled with rich worldbuilding and pulse-pounding action.

The reign of the kings of Sharakhai has been broken. The blood mage, Queen Meryam, now rules the city along with the descendants of the fabled twelve Kings.

In the desert, Çeda has succeeded in breaking the asirim's curse. Those twisted creatures are now free, but their freedom comes at great cost. Nalamae, the goddess who aided Çeda, lies dead, slain in battle with her sister goddess. Çeda, knowing Nalamae would have been reborn on her death, sets out on a quest to find her.

The trail leads Çeda to Sharakhai where, unbeknownst to her, others are searching for Nalamae as well. Çeda's quest to find her forces her into a terrible decision: work with the Kings or risk Sharakhai's destruction.

Whatever her decision, it won't be easy. Sharakhai is once more threatened by the forces of the neighboring kingdoms. As the powers of the desert vie for control of the city, Çeda, her allies, and the fallen Kings must navigate the shifting fates before the city they love falls to the schemes of the desert gods.

Praise for The Song of Shattered Sands series

"Bradley P. Beaulieu continues to move the story forward in an intriguing fashion, weaving his plotlines into a great tapestry that promies a lot of great things to come."--Pat's Fantasy Hotlist

Bradley P. Beaulieu is the author of the Lays of Anuskaya Trilogy and The Song of the Shattered Sands series, beginning with the acclaimed Twelve Kings in Sharakhai. His writing has garnered many accolades, including a Gemmell Morningstar Award nomination and the L. Ron Hubbard Writers of the Future Award.
Loading...
or support indie stores by buying on