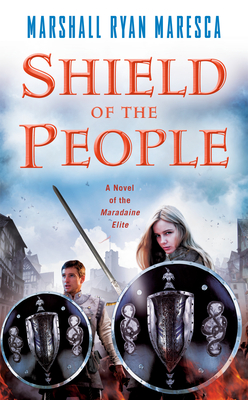 Shield of the People (Maradaine Elite #2)

After stopping Tharek Pell and saving the Druth Parliament, Dayne Heldrin and Jerinne Fendall find themselves on the margins of the Tarian Order: lauded as heroes in public but scorned and ignored in private, their future in the Order hazy. Dayne is given an assignment that isolates him from the Order, and Jerinne is hazed and bullied at the bottom of the initiate rankings.

But it's a grand holiday week in the city of Maradaine, celebrating over two centuries of freedom and the foundation of the reunified modern nation, and with that come parades, revelry... and protests and demonstrations. A dissident group called The Open Hand--and their mysterious, charismatic leader, Bishop Ret Issendel--seeks to disrupt the Parliament elections with their message of secession and dissolution.

Despite orders to stay out of the public eye, Dayne and Jerinne are drawn into the intrigue of the Open Hand and kept apart by dark powerful conspiracies that brew around them. Dayne and Jerinne must fight for their own principles, and protect the will of the people as the election is thrown into chaos.

Praise For Shield of the People (Maradaine Elite #2)…

Praise for the Maradaine Elite series

"A series of violent rebel threats on the elections and the twisty machinations of both the Tarian Order and the Open Hand ensure enough action and intrigue for any fan of fantasy adventure. Series readers will delight in returning to the rich universe of Maradaine." —Publishers Weekly