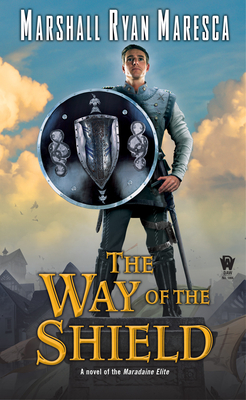 The Way of the Shield (Maradaine Elite #1)

Dayne Heldrin always dreamed of being a member of the Tarian Order. In centuries past, the Elite Orders of Druthal were warriors that stood for order, justice, and the common people. But now, with constables, King's Marshals, and a standing army, there is little need for such organizations, and the Tarian Order is one of the last remnants of this ancient legacy. Nevertheless, Dayne trained his body and mind, learned the arts of defense and fighting, to become a candidate for the Tarian Order.

When a failed rescue puts Dayne at fault for injuring the child of a powerful family, his future with the Tarians is in jeopardy. The Parliament controls the purse strings for the Order, and Dayne has angered the wrong members of Parliament. He returns to the capital city of Maradaine in shame, ready to be cast out of the Order when the period of his candidacy ends.

Dayne finds Maradaine in turmoil, as revolutions and dark conspiracies brew around him, threatening members of Parliament and common people alike. Dayne is drawn into the uproar, desperate not to have one more death or injury on his conscience, but the Order wants him to stay out of the situation. The city threatens to tear itself apart, and Dayne must decide between his own future and his vow to always stand between the helpless and harm.

Praise For The Way of the Shield (Maradaine Elite #1)…

"Marshall Ryan Maresca is some kind of mad genius…. Not since Terry Pratchett’s Ankh Morpork have we enjoyed exploring every angle of an invented locale quite this much." —B&N Sci-Fi & Fantasy Blog

Marshall Ryan Maresca is the author of the Maradaine novels, which now consist of four series set in an interconnected world. His work has appeared in Norton Anthology of Hint Fiction, and Rick Klaw's anthology Rayguns Over Texas. He also has had several short plays produced and has worked as a stage actor, a theatrical director, and an amateur chef.
Loading...
or support indie stores by buying on