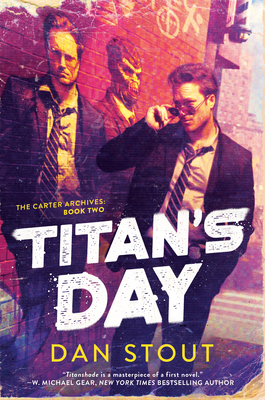 The second book in the acclaimed Carter Archives noir fantasy series returns to the gritty town of Titanshade, where danger lurks around every corner.

The city of Titanshade pulses with nervous energy. The discovery of new riches beneath its snowfields has given residents hope for prosperity, but it also means the arrival of federal troops, along with assurances that they are only there to "stabilize the situation".

Newcomers flood the streets, dreaming of finding their fortunes, while in the backrooms and beer halls of the city, a populist resistance gains support, its leaders' true motives hidden behind nativist slogans. And in an alley, a gruesome discovery: the mutilated body of a young woman, a recent immigrant so little-regarded that not even her lovers bothered to learn her name. But in death, she's found a champion.

Detective Carter single-mindedly pursues the killer as he navigates political pressures and resists becoming a pawn in the struggles tipping the city toward anarchy. But when more innocent lives are lost and time runs short, he's forced to decide if justice is worth sparking all-out war in the streets during the biggest celebration of the year: Titan's Day.

"Take a little Mickey Spillane, some Dashiell Hammett, a bit of Raymond Chandler, and mix it with Phillip K. Dick's Blade Runner; add a taste of C. J. Box, and Craig Johnson, and you've got a masterpiece of a first novel. I hate to call any novel a work of genius, but Stout's Titanshade taps all the right keys." —W. Michael Gear, New York Times bestselling author

Dan Stout writes about fever dreams and half-glimpsed shapes in the shadows. His fiction draws on travels throughout Europe, Asia, and the Pacific Rim as well as an employment history spanning everything from subpoena server to assistant well driller. Dan's stories have appeared in publications such as The Saturday Evening Post, Nature, and Intergalactic Medicine Show.
Loading...
or
Not Currently Available for Direct Purchase