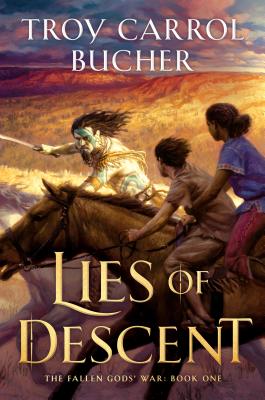 In this compelling fantasy from a debut author, two young people must unite two warring cultures to banish the gods who destroyed their homeland.

The Fallen Gods' War drove the remnants of a victorious army across the ocean in search of a new homeland. A thousand years later, the lifeless continent of Draegora is largely forgotten, a symbol for the regiments that remain. Demons to some. Protectors to others. The power of their god-touched blades has forged a nation, though many resent their absolute control.

Riam and Nola are unknowing descendants of the old world. When it’s discovered they carry enough Draegoran blood to serve in the regiments, they are dragged away from their families to begin training. If they survive, they will be expected to enforce the laws of the covenant, to fight the Esharii tribesmen who raid along the border, and to be judge, jury, and executioners for those accused of crimes.

For Riam, who welcomes his escape from an abusive father, the power to protect those who cannot defend themselves is alluring. For Nola, who wishes to return home, it is a betrayal by all she holds dear.

Neither is given a choice...and neither may ever get the chance to serve.

Lies of Descent begins an epic trilogy of fallen gods, betrayal, and magic—where dark motives often dwell within the true and just, and where the things most feared sometimes lead to salvation.

Praise for Lies of Descent:

"The opening salvo in what promises to be a dramatic and inventive new fantasy series." —Peter McLean, author of Priest of Bones

"Well-written and compelling, Troy Bucher's Lies of Descent depicts how factual accuracy, military culture, and religion all conceal a long-standing historical deception about to implode into a conflagration fueled by the lust for power and fanned by mythic misconceptions." —L. E. Modesitt, Jr., author of the Recluce novels

“Troy Carrol Bucher deftly twists all of your expectations into new and innovative directions.  Unpredictable; readers will not know what to expect from this epic fantasy as the lies that the world lives by begin to unravel.” —Joshua Palmatier, author of the Ley trilogy

"This coming of age story will appeal to fantasy readers of all ages." —Booklist

"Troy Carrol Bucher’s debut novel shows how much promise he offers to the literary world with an inspiring imagination of secrets only touched upon." —Irish Film Critic

Lieutenant Colonel Troy Carrol Bucher served thirty years in the U.S. Army, where his assignments sent him to three wars and places like Turkey, Albania, Saudi Arabia, Iraq, Afghanistan, Germany, Kuwait, and Korea. His travels allow him to tap into a lifetime of experience working with diverse cultures and peoples, bringing multiethnic customs and realism with a distinct military flavor to his Science Fiction and Fantasy. You can find out more about him at www.tcbucher.com.
Loading...
or
Not Currently Available for Direct Purchase