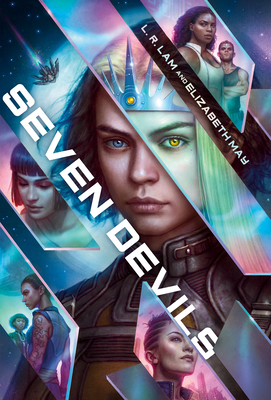 This first book in a feminist space opera duology follows seven resistance fighters who will free the galaxy from the ruthless Tholosian Empire--or die trying.

When Eris faked her death, she thought she had left her old life as the heir to the galaxy's most ruthless empire behind. But her recruitment by the Novantaen Resistance, an organization opposed to the empire's voracious expansion, throws her right back into the fray.

Eris has been assigned a new mission: to infiltrate a spaceship ferrying deadly cargo and return the intelligence gathered to the Resistance. But her partner for the mission, mechanic and hotshot pilot Cloelia, bears an old grudge against Eris, making an already difficult infiltration even more complicated.

When they find the ship, they discover more than they bargained for: three fugitives with firsthand knowledge of the corrupt empire's inner workings.

Together, these women possess the knowledge and capabilities to bring the empire to its knees. But the clock is ticking: the new heir to the empire plans to disrupt a peace summit with the only remaining alien empire, ensuring the empire’s continued expansion. If they can find a way to stop him, they will save the galaxy. If they can't, millions may die.

"Lam and May bring a multivoice story from a group of diverse, courageous females attempting to save themselves and their galaxy. Backstories and present-day actions are built into an alien setting, well-rounded characters, and an action-filled plot with themes of colonization, military manipulation, and conditioning." —Library Journal

Elizabeth May is the author of the YA fantasy trilogy The Falconer and short fiction published in the anthology Toil & Trouble. She was born and raised in California before moving to Scotland, where she earned her PhD at the University of St Andrews.

Laura Lam is the author of feminist space opera Seven Devils (co-written with Elizabeth May), BBC Radio 2 Book Club section False Hearts, the companion novel Shattered Minds, and the award-winning Micah Grey series. Her short fiction and essays have appeared in anthologies such as Nasty Women, Solaris Rising 3, Cranky Ladies of History, Scotland in Space, and more.
Loading...
or support indie stores by buying on