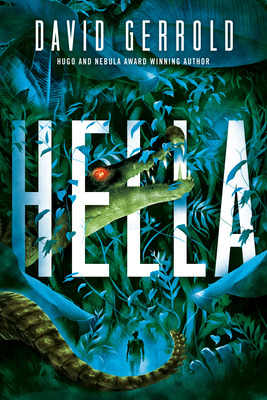 A master of science fiction introduces a world where everything is large and the problems of survival even larger in this exciting new novel.

Hella is a planet where everything is oversized—especially the ambitions of the colonists.

The trees are mile-high, the dinosaur herds are huge, and the weather is extreme—so extreme, the colonists have to migrate twice a year to escape the blistering heat of summer and the atmosphere-freezing cold of winter.

Kyle is a neuro-atypical young man, emotionally challenged, but with an implant that gives him real-time access to the colony's computer network, making him a very misunderstood savant. When an overburdened starship arrives, he becomes the link between the established colonists and the refugees from a ravaged Earth.

The Hella colony is barely self-sufficient. Can it stand the strain of a thousand new arrivals, bringing with them the same kinds of problems they thought they were fleeing?

Despite the dangers to himself and his family, Kyle is in the middle of everything—in possession of the most dangerous secret of all. Will he be caught in a growing political conspiracy? Will his reawakened emotions overwhelm his rationality? Or will he be able to use his unique ability to prevent disaster?

"The effortlessly diverse cast, complex political machinations, and heartfelt coming-of-age themes combine to create a fleshed-out vision of the future that is intense, emotional, and immersive while still maintaining a sense of rollicking fun. Sci-fi readers should snap this up." —Publishers Weekly (starred)

"Gerrold has created a vibrant world with a creative exploration of colonization and alien ecology that also smoothly touches on polyamory, gender confirmation, and queer relationships. Hella does what science fiction does best: it uses classic sf tropes to ask important questions about contemporary society." —Booklist (starred)

"The thoughtful and enjoyable page-turner Hella [is] a book sure to entrance anyone with an active imagination for distant worlds and giant monsters." —Chicago Review of Books

"Sci-fi has a strong tradition of “deathworld” planets. David Gerrold’s Hella is one of them, on steroids.... Gerrold makes it plain that there’s as much drama and danger in office politics as there is in dealing with wild beasts." —Wall Street Journal

David Gerrold has been writing professionally for half a century. He created the tribbles for Star Trek and the Sleestaks for Land Of The Lost. His most famous novel is The Man Who Folded Himself. His semi-autobiographical tale of his son's adoption, The Martian Child won both the Hugo and the Nebula awards, and was the basis for the 2007 movie starring John Cusack and Amanda Peet.
Loading...
or support indie stores by buying on