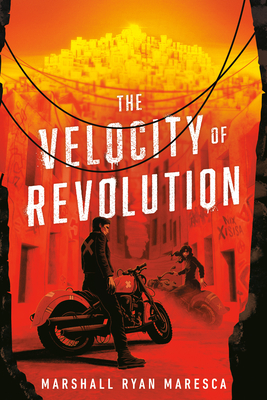 The Velocity of Revolution

From the author of the Maradaine saga comes a new steampunk fantasy novel that explores a chaotic city on the verge of revolution.

Ziaparr: a city being rebuilt after years of mechanized and magical warfare, the capital of a ravaged nation on the verge of renewal and self-rule. But unrest foments as undercaste cycle gangs raid supply trucks, agitate the populace and vandalize the city. A revolution is brewing in the slums and shantytowns against the occupying government, led by a voice on the radio, connected through forbidden magic.

Wenthi Tungét, a talented cycle rider and a loyal officer in the city patrol, is assigned to infiltrate the cycle gangs. For his mission against the insurgents, Wenthi must use their magic, connecting his mind to Nália, a recently captured rebel, using her knowledge to find his way into the heart of the rebellion.

Wenthi's skill on a cycle makes him valuable to the resistance cell he joins, but he discovers that the magic enhances with speed. Every ride intensifies his connection, drawing him closer to the gang he must betray, and strengthens Nália's presence as she haunts his mind.

Wenthi is torn between justice and duty, and the wrong choice will light a spark in a city on the verge of combustion.

Praise For The Velocity of Revolution…

Praise for The Velocity of Revolution

"Maresca's standalone is another example of his delightful world building." —Booklist (starred review)

"[The Velocity of Revolution] is an enjoyable read delving into a rich culture and complex world. If you are looking for a good, fun story that touches on everything from class discrimination to street racing, then you will find what you are looking for here." —Game Vortex

"It’s incredibly clever and very intimate; you almost feel like you’re intruding, in some scenes, as though you should slip out quietly and leave the characters to these intensely private, powerful discoveries. Maresca is one hell of an amazing writer." —Every Book a Doorway

Marshall Ryan Maresca is a fantasy and science-fiction writer, author of the Maradaine Saga: four braided series set amid the bustling streets and crime-ridden districts of the exotic city called Maradaine, which includes The Thorn of Dentonhill, A Murder of Mages, The Holver Alley Crew, and The Way of the Shield. He is also the author of the upcoming Velocity of Revolution, and has been a playwright, an actor, a delivery driver, and an amateur chef.
Loading...
or support indie stores by buying on