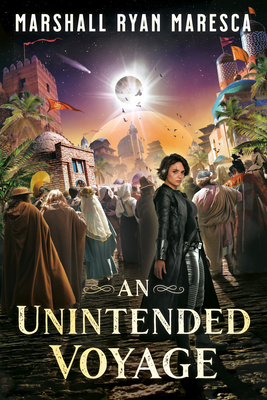 Moving outside the city of Maradaine, this new novel follows a lone member of the Maradaine Constabulary as she navigates a new but just as dangerous city.

Sergeant Corrie Welling--the young constabulary officer from Maradaine--has been abducted and confined on a ship bound for distant shores, where her captors have nefarious plans for her. With fortune and ingenuity, Corrie escapes, but finds herself stuck in a sprawling metropolis on the other side of the world: The Mocassa.

The Mocassa is a test unlike anything Corrie has ever faced. She doesn't speak the language, doesn't know the culture, and is forbidden from leaving the city until she pays off a colossal debt. Even if she's able to find decent work, it will take her years to settle her accounts and get home.

But Corrie Welling will not be cowed. She will work, fight, and hold her chin high. As a fringe faction of an apocalyptic faith spreads throughout the city, threatening the new friends she's sworn to protect, she'll continue to stand up for the values instilled in her as a member of the Maradaine Constabulary. Even if, as her darkest day approaches, she has to do it alone.

Praise For An Unintended Voyage…

"Maresca’s doughty heroes remain sturdy as ever, and the story moves with lightning speed. Fantasy adventure fans will enjoy this action-packed thriller, and series readers will be gratified to see all the pieces come together." —Publishers Weekly

"This epic adventure is hard to put down, leaving readers curious about the future progression of these characters while smoothly setting up the next adventure." —Booklist

"I love the complexity of Marshall Ryan Maresca’s worldbuilding as the vast conspiracy underlying all the inner workings of Maradaine is emerging through the intertwining pieces coming together. It’s nothing short of brilliant!" —Fresh Fiction

"Highly recommend this series to anyone who loves high fantasy, political intrigue, magic, fantastic world building, and characters who you can root for." —Gizmo's Reviews

Marshall Ryan Maresca is a fantasy and science-fiction writer, author of the Maradaine Saga: four braided series set amid the bustling streets and crime-ridden districts of the exotic city called Maradaine, which includes The Thorn of Dentonhill, A Murder of Mages, The Holver Alley Crew, and The Way of the Shield. He is also the author of the standalone Velocity of Revolution, and has been a playwright, an actor, a delivery driver, and an amateur chef.
Loading...
or support indie stores by buying on