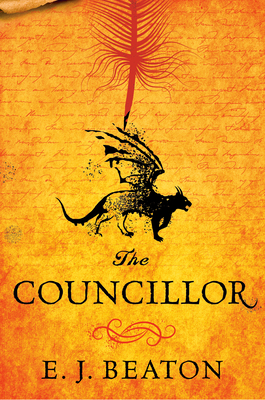 This fantasy novel follows a scholar's quest to choose the next ruler of her nation amidst lies, conspiracy, and assassination

“The Councillor is, in a word, sumptuous. E.J. Beaton’s debut is an expertly crafted story of cut-throat politics, courtly intrigue, addiction, sex, and murder, gilded by some of the most eloquent writing I’ve read in a long while.” —Nicholas Eames, David Gemmell Morningstar Award-winning author of Kings of the Wyld

“Vivid, intelligent, and intense, The Councillor is a story that begs to be consumed. Beaton skillfully layers poetic prose over intricate political machinations, elemental magic, and the strengths and foibles of the human heart.”—Andrea Stewart, author of The Bone Shard Daughter

"Emulating Lysande’s approach as a quiet, analytical woman, Beaton’s novel begins by prodding at these newcomers, then thunders to a breathless conclusion as all the strands in this shrewd plot finally come together. A clever start to what’s sure to be an exciting duology." —ALA Booklist

E. J. Beaton is the author of the fantasy novel The Councillor, out now from DAW/Penguin. She has been nominated for a Pushcart Prize for Poetry. Her previous work includes a poetry collection, and she has been shortlisted for several Australian poetry prizes. She studied literature and writing at university, completing a PhD in English (Creative Writing). She lives in Melbourne, Australia.
Loading...
or support indie stores by buying on