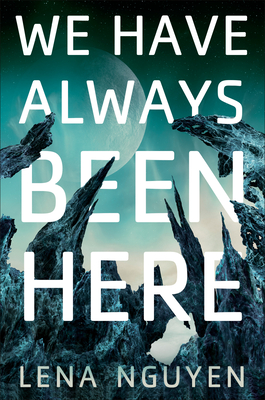 We Have Always Been Here

This psychological sci-fi thriller from a debut author follows one doctor who must discover the source of her crew's madness... or risk succumbing to it herself.

Misanthropic psychologist Dr. Grace Park is placed on the Deucalion, a survey ship headed to an icy planet in an unexplored galaxy. Her purpose is to observe the thirteen human crew members aboard the ship—all specialists in their own fields—as they assess the colonization potential of the planet, Eos. But frictions develop as Park befriends the androids of the ship, preferring their company over the baffling complexity of humans, while the rest of the crew treats them with suspicion and even outright hostility.

Shortly after landing, the crew finds themselves trapped on the ship by a radiation storm, with no means of communication or escape until it passes—and that’s when things begin to fall apart. Park’s patients are falling prey to waking nightmares of helpless, tongueless insanity. The androids are behaving strangely. There are no windows aboard the ship. Paranoia is closing in, and soon Park is forced to confront the fact that nothing—neither her crew, nor their mission, nor the mysterious Eos itself—is as it seems.

Praise For We Have Always Been Here…

Praise for We Have Always Been Here

“We Have Always Been Here is an extraordinary, multifarious debut: a white-knuckle adventure, a wrenching love story, a confounding intellectual puzzle, and a masterful inquiry into the nature of consciousness. Lena Nguyen has done with her first book something that takes most writers decades. It’s all in here, and it’s all fantastic.” —J. Robert Lennon, author of Subdivision

"Nguyen's debut seamlessly blends the nail-biting pace of a thriller with the detailed set pieces of science fiction, perfect for fans of either genre." —ALA Booklist (starred)

"Nguyen’s is full of precise lines and icy sharpness, creating a world that is simultaneously oppressively expansive and uncommonly claustrophobic." —Bookpage (starred)

"An exciting debut that delves into themes of corporate conscription, the definition of humanity, and the complexity of relationships. This science fiction thriller will keep readers guessing and wondering past the final page." —Library Journal

“There’s a real palpable tension and delirium infused into Nguyen’s writing that enhances what could have been a straightforward thriller into something much deeper, sharper, and stranger.” —The Speculative Shelf

The daughter of Vietnamese immigrants, Lena Nguyen lives with her partner in the alien desert of Arizona. She received her MFA in fiction from Cornell University, where she also taught courses in English, writing, and zombies. Her science fiction and fantasy have won several accolades, and she was a Writers of the Future finalist. When not writing, Lena enjoys editing and game development. We Have Always Been Here is her debut novel.
Loading...
or support indie stores by buying on