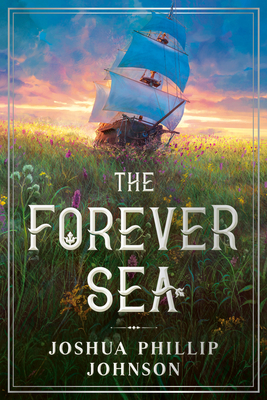 Now in paperback, the first book in a new environmental epic fantasy series set in a world where ships kept afloat by magic sail an endless grass sea.

On the never-ending, miles-high expanse of prairie grasses known as the Forever Sea, Kindred Greyreach, hearthfire keeper and sailor aboard harvesting vessel The Errant, is just beginning to fit in with the crew of her new ship when she receives devastating news. Her grandmother—The Marchess, legendary captain and hearthfire keeper—has stepped from her vessel and disappeared into the sea.

But the note she leaves Kindred suggests this was not an act of suicide. Something waits in the depths, and the Marchess has set out to find it.

To follow in her grandmother’s footsteps, Kindred must embroil herself in conflicts bigger than she could imagine: a water war simmering below the surface of two cultures; the politics of a mythic pirate city floating beyond the edges of safe seas; battles against beasts of the deep, driven to the brink of madness; and the elusive promise of a world below the waves.

Kindred finds that she will sacrifice almost everything—ship, crew, and a life sailing in the sun—to discover the truth of the darkness that waits below the Forever Sea.

Praise for The Forever Sea

“I can rarely remember being this excited for a debut novel. This was everything I wanted it to be. Wind-swept prairie seas, pirates, magic, and found families.” —Mary Robinette Kowal, Hugo, Nebula, and Locus Award-winning author of the Lady Astronaut series

"What an amazing world—from the ecosystem, to the ships that ply the deep grass sea, to the magic and people within!" —Fran Wilde, two-time Nebula-winning author of Riverland and Updraft

“Beautifully lyrical and imaginative, Johnson's debut sings a twisting tale of adventure full of diverse characters and a lush world ripe to fall in love with. With a heart that will haunt you, this ecopunk story is unlike any you've seen before.” —Linden A. Lewis, author of The First Sister

"In this rich and well-realized world, magic has an ecological price as well as profit, and conflicts are between equally complicated communities rather than simplistic good vs. evil. This ending of this excellent debut promises more adventures in its fragile, Miyazaki-esque world." —Booklist (starred review)

"Johnson’s beautiful coming-of-age saga touches on subjects of conservation, water rights, morality, and relationships.... The book’s setting and plot are so original as to be a breath of fresh air to the fantasy genre." —Library Journal (starred review)

“Lush descriptions of plant life abound... When combined with the exceptional protagonist and themes of embracing the unknown, [The Forever Sea] calls to mind Ursula K. Le Guin’s Earthsea series. With a good balance of grit and tenderness, this entertaining story makes a nice addition to the growing hopepunk subgenre.” —Publishers Weekly

Joshua Phillip Johnson lives in a little green house on what used to be the prairie with his partner and their child. His work has appeared in Syntax & Salt, The Future Fire, and Metaphorosis Magazine, among others. He teaches at a small liberal arts university. The Forever Sea is his first novel.
Loading...
or support indie stores by buying on