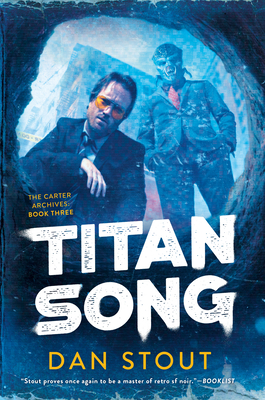 The third book in the acclaimed Carter Archives noir fantasy series returns to the gritty town of Titanshade, where danger lurks around every corner.

With the return of spring, new life floods into Titanshade. The sun climbs higher and stays longer, the economy is ascendant, and ever more newcomers arrive to be part of the city's rebirth. Even pop culture has taken notice, with a high-profile concert only days away. When a band member's murder threatens to delay the show, the diva star performer demands that the famous Detective Carter work the case. But Carter has secrets of his own, and his investigation unearths more victims and dark secrets, triggering a spiral of deceit, paranoia, and nightmarish magical transformations.

As conspiracies are exposed, Carter is sucked even deeper into the machinations of the rich, the powerful, and the venerated. Soon the very foundations of the city threaten to collapse and Carter's own freedom is on the line as he navigates between old enemies and fragile new alliances while racing to learn the true cause of this horrific series of deaths.

"Take a little Mickey Spillane, some Dashiell Hammett, a bit of Raymond Chandler, and mix it with Phillip K. Dick's Blade Runner; add a taste of C. J. Box, and Craig Johnson, and you've got a masterpiece of a first novel. I hate to call any novel a work of genius, but Stout's Titanshade taps all the right keys." —W. Michael Gear, New York Times bestselling author of the Donovan novels

Dan Stout writes about fever dreams and half-glimpsed shapes in the shadows. His fiction draws on travels throughout Europe, Asia, and the Pacific Rim as well as an employment history spanning everything from subpoena server to assistant well driller. Dan's stories have appeared in publications such as The Saturday Evening Post, Nature, and Intergalactic Medicine Show.
Loading...
or support indie stores by buying on