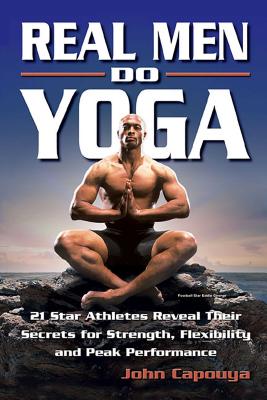 With its revolutionary approach to yoga and innovative, male-oriented instruction, Real Men Do Yoga will be the definitive guide for both novice and veteran men who are discovering the innumerable physical and mental benefits of yoga.

Photos of sports stars doing yoga, such as football greats Dan Marino and Chris Carter, drive home a powerful message. Each chapter offers a combination of stretches and strength-builders that target and benefit specific areas:

In a sea of yoga books aimed at women, Real Men Do Yoga is an easily accessible, "non-New Agey" guidebook that takes something mysterious to American men and offers a reassuringly effective and practical guide that they'll actually use.

"A book for those seeking a more macho road to enlightenment."-GQ Magazine

"The author presents [yoga] exercises in a logical progression that not only makes sense to readers but also involves them in performing the exercises before having to finish the book. While aimed at reluctant males, this well-organized and engagingly written book would certainly be intructional for anyone. Recommended for public libraries, consumer health libraries, and universities with physical education majors." -Library Journal, August 2003

"This may be the world's most in-your-face yoga guide ... You won't find anything about the yamas of niyamas here, but you just might interest that Gatorade-slammin' fella of yours in accompanying you to class after he peruses this X-Games - esque volume." -Yoga Journal, Nov. 2003

John Capouya is an award-winning journalist and yoga enthusiast. He was the health and medicine editor for Newsweek; the editor of the "Sunday Styles" section for the New York Times; the editor for Pro Magazine; and is now the deputy editor of SmartMoney Magazine.
Loading...
or support indie stores by buying on