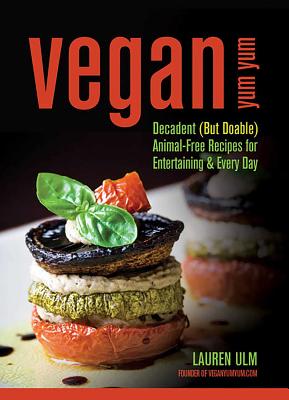 Decadent (But Doable) Animal-Free Recipes for Entertaining and Everyday

Lauren Ulm is a vegan cook whose star is on the rise. She hosts a popular blog that is read by more than 30,000 a day. She's a 2008 Veggie Awards winner from VegNews magazine who has been featured on The Martha Stewart Show, AOL, and the hippest sites on the web, including BoingBoing.net and Etsy.com. Now she delights her blog fans, as well as millions of vegetarian and vegan enthusiasts, with this sophisticated four-color cookbook filled with original and the most beloved meals from her blog.
From appetizers to desserts, breakfasts to dinners, as well as holiday- and company-worthy fare, Ulm proves that vegan food doesn't have to be bland food. It's her love (okay, her obsession!) of making vegan foods exciting that is evident in her creations—recipes that are as artistic as they are quirky. With 90 percent of her ingredients available at any grocery store, her recipes are doable for the average person, and range from comfort-food staples like whoopee pies, macaroni, and blueberry cobbler, to foods with a sophisticated flair like mojito cupcakes, daikon noodle salad, and flaky pizza purse tapas appetizers. Stunning photographs and step-by-step instructions make Vegan Yum Yum an essential resource for any vegan kitchen.

Lauren Ulm, "Lolo," is a vegan foodie and founder of veganyumyum.com who lives in Boston with her husband and two cats. She is not a chef, has never been to culinary school, and she's not a professional photographer (but she has fun pretending!) When she went vegan in 2002, the kitchen became her favorite room in the house, and still is today. She has appeared on The Martha Stewart Show and has been featured in Vegetarian Times. Visit veganyumyum.hcibooks.com

My one week experiment with veganism, inspired by Lauren Ulm's book Vegan Yum Yum, was a revelation to me. I not only survived, but thrived without dairy and meat in my diet... Vegan Yum Yum has a huge range of inspiring recipes. The photo of the seitan black corn bean burger is pure, classy food porn that makes its carnivorous rivals in the fast food ads look like cheap white trash. I was worried about what the desserts would be like as I'm usually a cream fiend, but I need not have feared as I fell head over heels for the blueberry grunts recipe.--Jackie Gorman, elephant journal
or
Buy Here
Copyright © 2020 American Booksellers Association