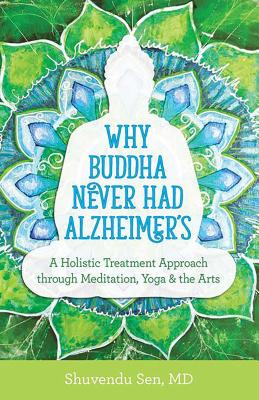 Why Buddha Never Had Alzheimer's

A Holistic Treatment Approach through Meditation, Yoga, and the Arts

Who among us is not affected by issues such as stress, depression, personality and behavioral changes, agitation, hypertension or high cholesterol—to name a few? Did you know that these are some of the cognitive and biological deficiencies that are associated with Alzheimer's?

It is estimated that 5.4 million people in the U.S. are afflicted with Alzheimer's disease. In its capacity to completely destroy personalities, relationships and daily living, we cannot afford to continue thinking of it as a private disease. Alzheimer's is a family problem—ruthless in its scope and spread. And despite relentless trials and research studies, scientists have not found a drug to control it. Even worse, there isn't even a fully reliable diagnostic test for it. Alzheimer's disease has become a gigantic specter that looms before all of us as we age, and it is advancing unimpeded.

Today we know that contributing factors and symptoms (such as stress and hypertension) can be alleviated with holistic, alternate management approaches—like meditation, yoga, music therapy and virtual reality therapy. Research studies from Harvard Medical School, Johns Hopkins University and Mayo Clinic, among many others, have demonstrated the comprehensive benefits of yoga and meditation on various aspects of the human mind—and when you think about it, that's where Alzheimer's disease develops—in the mind.

But, how can meditation and yoga stop or even reverse the course of Alzheimer's? They set the mind on an inward journey where the risk factors that precipitate the disease are formed. This bridging of the old and new creates an imperative paradigm shift in our perspective toward Alzheimer's disease management. Why Buddha Never Had Alzheimer's is precisely what is needed to cause a drastic and necessary revolution in medical care.

Praise For Why Buddha Never Had Alzheimer's: A Holistic Treatment Approach through Meditation, Yoga, and the Arts…

"Dr. Sen's work is an important, provocative contribution to the field of neurology. I commend his book to any who are interested in Alzheimer's disease." —Benjamin Doolittle, MDDirector, Internal Medicine-Pediatrics Residency Program, Yale School of Medicine

"In this thoughtful and far-ranging book, Dr. Sen has raised the intriguing question of whether meditation, yoga, and spirituality could contribute to protecting the brains of our aging population from the ravages of illnesses like Alzheimer's disease. Weaving together history, interviews, the latest scientific literature, and vignettes from his own clinical practice—none more touching than the story of his patient with Alzheimer's disease calmed by his simple act of making her hospital room like home—Dr. Sen suggests that these holistic approaches could help to heal, in the broadest sense, the ills we all may confront. Excellent work!" —John W. Denninger, MD, PhDDirector of Research, Benson-Henry Institute for Mind Body Medicine at Massachusetts General Hospital/Associate Director of the MGH-McLean Adult Psychiatry Residency Training Program/Harvard Medical School

Why Buddha Never Had Alzheimer's has been selected as a 2017 Nautilus Silver Award Winner in the category Religion/Spirituality on Eastern Thought.

Shuvendu Sen, MD (Long Island, New York), is a nationally and internationally recognized physician, author, speaker, and a humanitarian for over 20 years. He is Director, Medical Education, and Associate Program Director, Internal Medicine Residency Program at Raritan Bay Medical Center, Meridian Hackensack University. He is the author of numerous medical and scientific publications, book chapters and abstracts and is one of the chief editors of a medical text book titled Principles of Clinical Diagnosis. Dr. Sen has been named to America's Best Physicians and has received the Oscar E. Edwards Award from the American College of Physicians, as well as many national and regional awards for research, teaching, and community contribution. Thrice nominated for the Pushcart Prize Award for both fiction and nonfiction works, Dr. Sen is the author of the critically acclaimed book for lay audiences A Doctor's Diary that was selected at the World Book Fair, held in India, in 2016. He serves in advisory capacities in many leadership committees, including the American College of Physicians, the Alzheimer's Association, and Rotary International. Dr. Sen has been featured on PBS and CBS among many other media outlets
Loading...
or
Not Currently Available for Direct Purchase