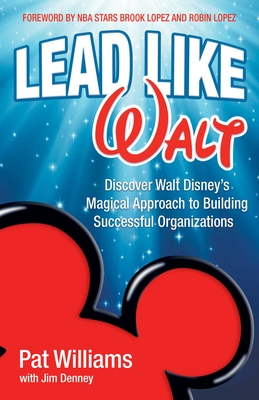 Whether you are building a small business from the ground up or managing a multinational company, you can learn the 7 key traits for leadership success from one of the greatest business innovators and creative thinkers of the 20th century: Walt Disney. Whether you know him as the first to produce cartoons in Technicolor, the mastermind behind the theme park Disneyland, or the founder of the largest entertainment conglomerate, Walt's story of creativity, perseverance in spite of obstacles, and achieving goals resonates and inspires as much today as it ever has.

Author Pat Williams began studying the life and leadership example of Walt Disney as he struggled to build an NBA franchise, the Orlando Magic. Since he was trying to accomplish a goal similar to so many of Walt's—starting with nothing and building a dream from the ground up—he realized that Walt could teach him what he needed to know. And indeed he did.

Through Walt Disney's leadership example, Pat found 7 key leadership traits that all great leaders must possess: Vision, Communication, People Skills, Character, Competence, Boldness, and A Serving Heart. Through never-before-heard Walt stories and pragmatic principles for exceeding business goals, you'll learn how to build those skills and implement them to be effective in any leadership arena. As you discover the life of this great leader, you'll realize that no goal is too great and no dream too daring for anyone who leads like Walt.

"We all know Disney the company, but some may have overlooked Disney the man. Pat Williams and Jim Denney bring Walt Disney to life in Lead Like Walt. Disney was part visionary, part entrepreneur, and part creative genius. Disney’s leadership serves as an example of how to bring great people together in order to create a bigger, bolder, and brighter future. Lead Like Walt is a joy to read and, as all books by Pat Williams, it is a rich reservoir of leadership wisdom."
— John Baldoni, Inc.com Top Leadership Expert and Speaker, Executive Coach

“Pat Williams has done a remarkable job of telling a very inspirational story of Walt Disney and the attributes that made him so successful. I highly recommend his book to help motivate you to a future you did not know was possible.”
— Don Iwerks, Former Disney Executive, an Oscar Winner and Co-founder of Iwerks Entertainment

“In Lead Like Walt, Pat Williams and Jim Denney have captured the management, leadership, and creative talent Walt Disney possessed. If you want to be great at what you do, I suggest you study this book and learn from Walt, and then you will know what to do when opportunities and obstacles appear in your life.”
— Lee Cockerell, Executive Vice President (retired and inspired), Walt Disney World® Resort

“More than 30 years ago, Pat Williams turned a dream into a reality when he guided the efforts to bring the NBA and the Orlando Magic to our city. In Lead Like Walt, Pat, a visionary in his own right, gives readers a glimpse into one of the great dreamers of all time, Walt Disney, and the principles and tactics we all can use to make an impact on the lives of others.”
— Orlando Mayor Buddy Dyer

“This book is an ‘E’ ticket if there ever was one. Authors Williams and Denney take you on a real-life Disney adventure through the eyes and experiences of the people who helped the man inside the mouse accomplish a world of wonders."
— Ron Stark, Director of S/R Laboratories® Animation Art Conservation Center

“Lead Like Walt is Pat Williams’ best thinking on how to be effective in an ever-changing marketplace. It’s a page-turner with actionable insights for leaders in any size organization. In fact, I am buying copies for my leaders and friends right away.  This is a must-read. Thank you, Pat, for always expanding our minds and engaging our hearts to lead differently.”
— Simon T. Bailey

“Great leaders turn visions into reality by empowering, inspiring, and motivating people. In Lead Like Walt, Pat Williams has broken down the essentials of Walt Disney’s leadership style, so that all of us can learn from his example. Whether you lead a scout troop, a corporation, or a nation, the insights in this book will make you a more effective leader.”
— Senator George J. Mitchell, Former Chairman of The Walt Disney Company

Pat Williams is a basketball Hall-of-Famer who served as co-founder and senior vice president of the NBA's Orlando Magic. Pat has been the general manager with NBA teams in Chicago, Atlanta, Philadelphia, and Orlando, including the 1983 World Champion 76ers. In 1996, Pat was named as one of the 50 most influential people in NBA history. In 2012, Pat received the John W. Bunn Lifetime Achievement Award from the Naismith Memorial Basketball Hall of Fame. With more than 50 years of professional sports experience, he has written more than 100 books, including the popular Coach Wooden, How to Be Like Mike, How to Be Like Coach Wooden, and How to Be Like Women of Influence. As one of America's top motivational and inspirational corporate speakers, Pat has addressed employees from many of the Fortune 500 companies. Visit: www.patwilliams.com. Jim Denney is the author of Walt's Disneyland, Answers to Satisfy the Soul, Writing in Overdrive, and the Timebenders series for young readers. He has written many books with Pat Williams, including How to Be Like Walt.
or
Not Currently Available for Direct Purchase