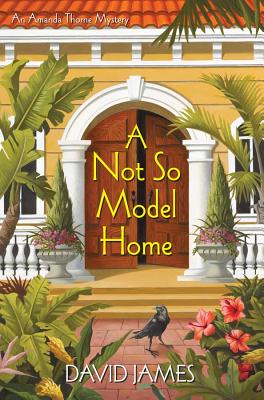 A Not So Model Home

Stylish luxury realtor Amanda Thorne is feeling the pinch of the slumping economy. But the crazed world of reality television just may be her ticket to the biggest listing in Palm Springs. Too bad her co-stars are dropping like flies all over the property. . .
Times are tough and the real estate market is tanking, even in posh Palm Springs. So when former client Ian Forbes, the eccentric head of an international hair care empire, offers Amanda a chance to list his palatial Spanish style pad, she reluctantly takes him up on it. All she has to do is appear on the bizarre reality dating show he's filming--and starring in--at his estate.
Under the watchful eye of chic, black-clad relationship counselor Aurora Cleft, a throng of attractive contestants descend on the mansion in hopes of winning Ian's heart--and his fortune. With so much at stake, the competition quickly grows fierce, and it's almost no surprise when two of Ian's prospective lovers turn up dead.
Amanda is certain the killer is among the house's catty cast of characters, so she enlists the help of her trusty ex-husband, Alex, and her hunky homicide detective boyfriend, Ken Becker, to wade through all the faux reality and get to the truth.
As she navigates the mansion's screwball maze of model good looks, A-list connections, and impossibly tall stilettos, Amanda quickly discovers that everyone had a conceivable motive for murder. And now that there are two more realtors competing with her for the lucrative listing, it seems the killer won't be the only one who's out for blood. . .