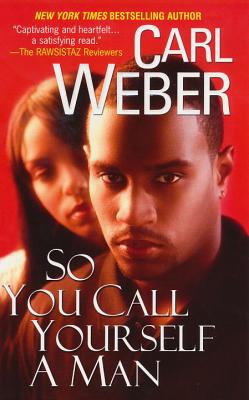 So You Call Yourself A Man (The Church Series #2)

Carl Weber, the New York Times bestselling author of Up to No Good, will keep you on edge with this tale of three lifelong friends. . .

James Robinson and his wife have had their rough patches. But seven years into their marriage, things are better than ever. . .until James's past comes back to haunt him--with a baby in tow.

James's best friend, Brent Williams, has always had women throwing themselves at him, but it's taken Brent a while to find someone who wants him for the man he is on the inside. His plus-sized fiancée isn't his usual type, but they seem like a match made in heaven--until a sexy third party comes along. . .

When Sonny Harrison's wife sends him packing, he's lonely until he reunites with his high school sweetheart. But as his feelings for her get a little too intense, Brent and James may be the only ones who can intervene. But will that mean losing their friend forever?


"Captivating and heartfelt. . .a satisfying read."
--The RAWSISTAZ Reviewers

Carl Weber is the New York Times bestselling author of The Preacher's Son, So You Call Yourself a Man, Something on the Side, Up to No Good, Big Girls Do Cry, Torn Between Two Lovers, and She Ain't the One. He is the Publisher and Editorial Director of Urban Books and CEO of Urban Books Media, which is currently producing films based on several of his bestselling novels. He lives in Long Island, New York, with his family. His Web site is carlweber.net.
Loading...
or
Not Currently Available for Direct Purchase