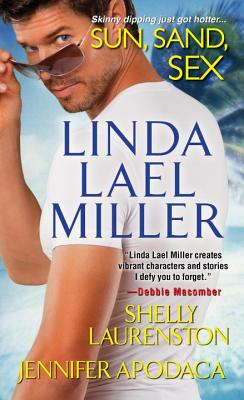 College sweethearts Teague and Joanna Darby are on the brink of divorce. But when a ferry strike leaves them stranded at their beloved beach cottage, falling for each other all over again makes for one steamy getaway. . .

My Kind of Town

Deputy Kyle Treharne hates Yankees--especially exotically beautiful ones like Emma Lucchesi who show up in his seaside North Carolina town. But if the sexy New Yorker's got a few tricks up her sleeve, so does the lawman. Something's gotta give. . .

You Give Love a Good Name

When wedding planner Lexie Rollins defended herself (with a staple gun) against a sleazy groom, who knew the assault and battery charges would stick? Now Lexie's running from gorgeous bounty hunter Nick Vardolous, who always gets his woman--every which way imaginable. . .

Linda Lael Miller is the award-winning author of many bestselling novels, including Courting Susannah, One Wish, and the Springwater Seasons series, as well as her acclaimed vampire romances, the first two of which are collected in Out of the Shadows.

Jennifer Apodaca went back to college after her three sons, Matt, Gary, and Paul, were born. Beginning with a vague idea of earning a marketing degree, she ended up pursuing a writing career with the full support of her husband, Dan.

First, Jennifer tried to tame her naturally edgy voice into writing romance, but dead bodies and quirky humor turned up with alarming regularity. So did rejection letters in her mailbox! Dan nagged her to write something contemporary and funny. Her mother dropped a hint about trying something modern. Her sister mentioned how good she'd be at writing a comedy, maybe even a mystery. Dan agreed with them. Finally, frustration drove her to murder, fictionally speaking, of course.

Dating Can Be Murder is the first book in the Samantha Shaw mystery series. Sam's a woman determined to make a new life for herself and her two sons. She has a little plastic surgery to fill out her tight sweaters, drops a few pounds off her waist and inches off her skirts, buys a dating service, and embarks on a hilarious and dangerous adventure.

And so Jennifer has been forced to admit that her husband, mother, and sister were right. Not entirely humbled,though, these days she is busy plotting future adventures for Samantha Shaw!

Originally from Long Island, New York Times bestselling author Shelly Laurenston has resigned herself to West Coast living, which involves healthy food, mostly sunny days, and lots of guys not wearing shirts when they really should. Shelly is also the New York Times bestselling author G.A. Aiken, creator of the Dragon Kin series. For more info about Shelly's books go to www.shellylaurenston.com. Or to check out G.A.'s dangerously and arrogantly sexy dragons go to www.gaaiken.com.
Loading...
or
Not Currently Available for Direct Purchase