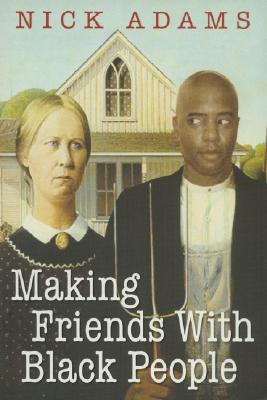 White people of America, we know you've got it rough.
Sure, black men and women have been through four hundred years of slavery, oppression, murder, and watching white college students try to dance. But now that it's hip to have black friends, white people aren't sure how to go about it. And that is a real American tragedy. Thank God Nick Adams is here to help you avoid potential racial pitfalls and successfully make the transition from white to "aiight." Now, you'll know not to start a conversation with, "So, that new Jay-Z album is pretty great, right?" Or tell a co-worker he looks just like (fill in blank with name of dark-skinned person who works in the other building.) You'll know that a lot of black people you meet at parties or work functions don't care who played Thelma's husband on "Good Times," don't want to discuss the Malcolm X biography you just read and definitely don't want to listen to country music. Ever. Yes, it's a good thing Nick is here to explain. Because if we're going to live together in peace and harmony, you people are going to need help.
Black People, Briefly Explained. A Q&A with Nick Adams
Q: Nick, what is the correct term to use when addressing my new friends: Black or African-American?
A: Personally, I always liked Afro-American. I liked being named after a 1970's hairdo. But then I wondered why we didn't become the Jheri-curled Americans or High Top Fade Americans.
Q: Nick, if black people can use the "N" word as a term of endearment, can I, a white person, do so?
A: No. I don't care if you have your hair in cornrows while wearing a Phat Farm t-shirt at an R. Kelly concert. Black people don't get to be president, and white people don't get to use the word nigger. Can we just call it even now?
Q: Nick, I'd like to try slang. Is that okay?
A: When you guys start using our words, that's when we know it's time for us to stop using them. Every time a white, middle-aged math teacher calls a student, "dog," black people all over the country are notified via email. Believe it.
Q: Nick, surely you have to agree that Eminem is a hip-hop visionary?
A: Let's try this one more time: Kurtis Blow, RUN-DMC, LL Cool J, Rakim, Chuck D, KRS-One, Tupac, Notorious B.I.G., Nas, Common, Mos Def, Bitch.