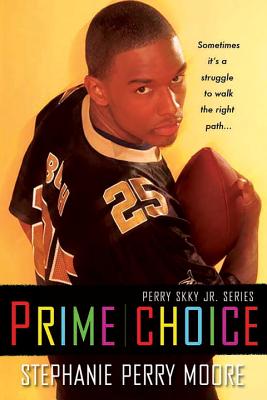 Torn between his desire for sex and his desire to please God, Perry Skky Jr. needs some guidance--before he lets down both himself and the Lord. . .

It's Perry's senior year--and he has every reason to feel good about himself. One of the most popular kids in his class, he's not only the best football player in the state, he's also acing every one of his AP classes. College recruiters are beating down his door to sign him. He even has such a good thing with his girlfriend, Tori, that he finally feels ready to take their relationship to the next level.

There's only one problem. Tori isn't ready. Her Christian beliefs tell her she needs to save herself. And with plenty of girls to choose from, Perry is tempted to break up with Tori and start spending time with someone who is ready for something more. The choice is his: to do what feels good--or to do right by God.

Includes a guide on how to start your own book club!

Stephanie Perry Moore is the author of the Perry Skky Jr., Yasmin Peace, Payton Skky, Laurel Shadrach, Carmen Browne, and the Faith Thomas Novelzine™ series. She also has written four adult titles, including her newest release, Wearing My Halo Tilted. Currently, she is an Executive Producer of Georgia Sky, a DVD series from Tyler Perry’s 34th Street Films based on her previous works. She lives in the greater Atlanta area with her husband, Derrick, and their three children.
Loading...
or support indie stores by buying on