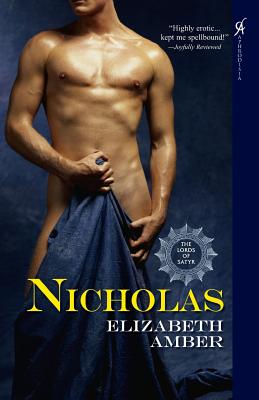 The Lords of Satyr

The last in a fabled line of otherworldly aristocracy, the Lords of Satyr are born to wealth, power, and a talent for sensual delight that mere mortals only dream of. Commanded to marry, these passionate men will travel to Rome, Venice, and Paris--and along the way will explore desires both shamelessly wicked and blissfully divine. . . He Had Sworn To Take A Proper Wife. He Hadn't Bargained On Meeting His Match. . . Nicholas looks very much like what he is--the handsome, successful heir to a vineyard in Tuscany. But Nicholas is much more, for he is one of the last in an ancient line of satyr men. And the dying king of ElseWorld wants him not only to marry, but to wed one of the king's own daughters--a half-human, half-faerie woman unaware of her heritage. Nicholas won't shirk his duty to produce heirs to guard his race's legacies, but he never plans to make his bride his only lover. A satyr's sexual hunger and sensual skills are legendary. One woman will never satisfy him. Or so Nicholas believes until he meets Jane. As spirited as she is fey, as beautiful as she is innocent, she is nevertheless determined to make her new husband hers alone--and she's eager for him to teach her every deliciously carnal secret he knows. . . Nicholas: ." . .the leading man is the sexiest one this reader has seen in a long time " --Romantic Times First place winner in Judge A Book By Its Cover, single title 2008, and in the First Coast Romance Writers, Beacon Contest. Placed or finaled in 7 other RWA regional contests including the National Readers Choice Award. On the Nielsen BookScan list of Top 100 best-sellers ." . .keeps hold of your heart and mind."-- Joyfully Reviewed, Recommended Read ." . .on my top ten favorite erotic books list. . .a double thumbs up. -- Night Owl Romance, 5 stars.