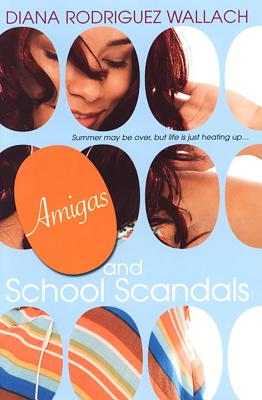 Home Is Where The Drama Is. . . Mariana Ruiz is bringing a lot home from her vacation in Puerto Rico, including memories of a hot summer romance, a new understanding of her (sometimes crazy) family. . .and her cousin Lilly Sanchez, who's enrolling in Mariana's suburban Philadelphia high school. Mariana's best friends, Madison and Emily, aren't thrilled about the new arrival, especially when Lilly soars through the ranks of Spring Mills High's social circles. But Mariana has other things on her mind. Like Mariana's developing crush on her locker buddy, Bobby, the one boy to ever take Emily on a real date. But it's the revelations at Mariana's Sweet 16 party that make it clear that life at Spring Mills High School will never be the same again.

Diana Rodriguez Wallach's debut young adult novel, Amor and Summer Secrets, is the first in a series to be published by Kensington Publishing in September 2008. The sequels to the series, Amigas and School Scandals and Adios to all the Drama, will be released in November 2008 and January 2009, respectively. The series features a 15-year female protagonist from Philadelphia's Main Line who is forced to spend the summer in Puerto Rico with family she's never met. Born to a Puerto Rican father and a Polish mother, Diana has experienced the cultures her characters inhabit, and many of the multi-cultural themes expressed in the novel are based on her personal background. Diana holds a journalism degree from Boston University, and during her junior year, she studied in Madrid, Spain. Post graduation, she moved to Manhattan where she worked as a reporter for a hotel trade magazine and served as the managing editor of an online real estate publication. In 2003, she moved back to her native Philadelphia and joined the Philadelphia Education Fund, a nonprofit dedicated to improving inner-city public schools. Her first novel, Amor and Summer Secrets, sold to Kensington Publishing on Fat Tuesday 2007 while she was at the Mardi Gras parades in New Orleans. She currently lives in Philadelphia with her husband Jordan.
Loading...
or support indie stores by buying on